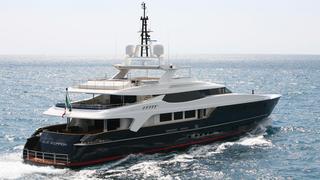 If you haven’t been able to get the tickets you wanted for the Rugby World Cup in London don’t panic because you can now enjoy matches from the next best place — a superyacht.

The 52.2 metre superyacht Mischief will be docked at Canary Warf during the Rugby World Cup and, as well as being available for match day charters, will also host a series of cocktail parties and Michelin-starred pop up dining experiences.

Superyacht Mischief, formerly called Blue Scorpion, will be available for private hire so that guests can make the most of her high-tech screens and sound equipment. Seats will be available on match days during the Rugby World Cup from the September 30 until November 1, with prices from £590 (excluding VAT).

The superyacht will also be holding a series of “Warm up Wednesdays” where exclusive lunches and dinners will be hosted by legends of the sport — including Lawrence Dallaglio, Matt Dawson and Dan Luger. While five famous chefs, Guillaume Brahimi, Sat Bains, Neil Perry, Shannon Bennett and Claude Bosi, will create the six course menus for guests. The menus will include a variety of different styles and will include a range of delicacies such as langoustine with caviar, roasted pigeon and wagu and foie gras.

This experience will be available from £990 per person (excluding VAT) and the first Warm Up Wednesday will be held on September 30.

According to Australian media the Baglietto superyacht was recently purchased by Ian Malouf although it is unclear whether he will also make the trip to London to enjoy the Rugby World Cup.