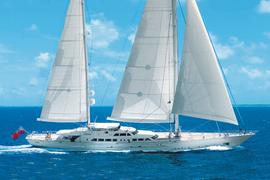 Here's an opportunity to view the 64m sailing yacht Felicità West, a central listing with Kevin Merrigan at Northrop & Johnson, as he hosts an Open Day aboard her in Monaco's Port Hercule on Monday, June 20th between 3pm and 7pm.

Felicità West is currently the tenth largest sailing yacht in the world. She was built by Perini Navi in 2003 to a design by Ron Holland with external styling by Nuvolari Lenard. She comfortably accommodates 10 guests in a master suite, two double and two twin cabins. Twin 1400 Deutz engines give her a cruising speed of 14 knots and a range of 4,500 nautical miles at 13 knots. Felicità West has just emerged from an extensive refit and is asking €28 million.