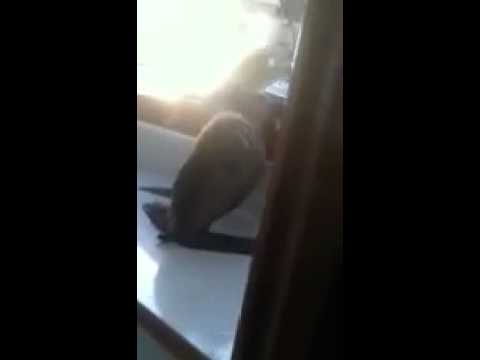 A yachtsman in San Diego, California, got a rude awakening on Sunday (10 May) morning when he discovered a sea lion pup had climbed on board.

Michael Duffy was on his 12.5m boat Elixir at the San Diego Yacht Club when he was awoken in the early hours of Mother’s Day to sounds of sneezing and snoring.

He couldn’t find the source of the noise but when it got light a few hours later he found the pup curled up on a pair of board shorts.

“It was a tiny little guy and I was kind of shocked, but he was basically asleep,” said Dufffy.

“Then he heard me coming, so he kind of looked up a little bit like when a dog is sleeping and you want to wake it up and it doesn’t want to wake up.”

Duffy decided to film the pup on his cellphone and the footage shows him gently coaxing him out of the yacht back in the water.

“He wasn’t shocked, he wasn’t surprised,” Duffy said. “Every once and a while he looked back and he didn’t look like he wanted to leave.”

The sea lion is reported to have had an orange tag and local press have suggested that the pup was probably a rescued and subsequently released by SeaWorld, or a neighbouring rescue group.

This pup is thought to be part of an escalating problem in the area. SeaWorld have rescued a record 800 mammals so far this year and most of them have been sea lions.