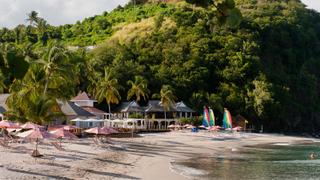 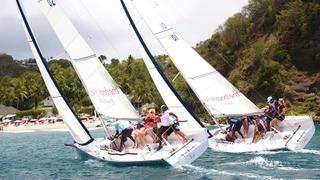 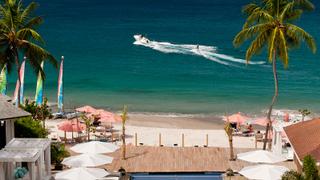 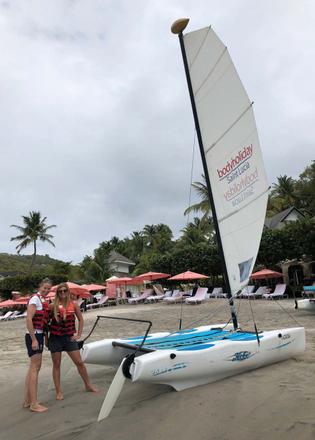 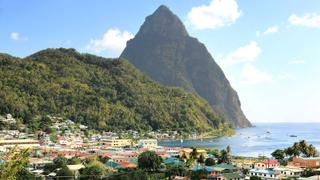 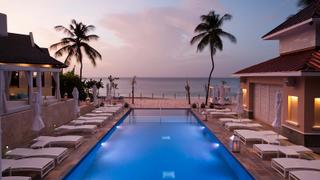 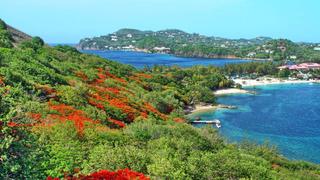 Swapping superyacht comforts for the exertions of dinghy racing, Sophia Wilson takes to the seas in St Lucia on a mission to get fit...

I’m dragging myself along the sand on all fours attempting the “Spider-Man crawl” and I’m convinced I’ve never looked less like a superhero in my life. My thighs are burning, I’m sweating profusely and a lady called Donna (a female version of Usain Bolt) is shouting at me to go faster. Granted, we are on a pristine strip of beach overlooking the sparkling Caribbean Sea, but it’s safe to say this is not my idea of a conventional holiday.

This is my first experience of a “fitness retreat” but I’m following in some prestigious footsteps at St Lucia’s BodyHoliday – including Hollywood actors, Olympians, Victoria’s Secret models and judges from Strictly Come Dancing. The Barnard family were definitely pre-curve when they opened the concept 30 years ago, when fly-and-flop holidays were the norm. “Things have changed dramatically since then,” says Andrew Barnard, deputy managing director. “Now most people that come here already have personal trainers and get nutritional advice at home. We are just here to reinforce values.”

The programme is constantly evolving to meet demand and last year the BodyHoliday launched a sailing club to encourage more guests to get active on the water. The resort expanded its fleet to four Hobie 13s, one Hobie 16, a J24 and two new X-Treme 26 racing yachts. It also recruited the help of British Olympic gold medallist Saskia Clark and double world champion Nick Thompson to offer their expertise during their annual Spring Sail month.

Unsurprisingly for a three-time Olympian, Clark is a self-confessed sailing geek and relishes the opportunity to take sailors of all abilities out on the water in her relaxed morning classes. “It’s a really nice introduction for first-time sailors, or people that might have sailed dinghies years ago, to be reintroduced to it,” she says. Starting from the basics, Clark uses a whiteboard on shore to explain the basics of wind power. Afterwards, pupils are let loose in the Hobie Cats to learn the basics of tacking and gybing. “The Hobies are a perfect ‘learn to sail’ beach boat. But to progress further in them can be quite tricky – you need to learn more,” she adds. I can see her point, while the basics from teenage summer holidays come back relatively quickly, light winds can make tacking tricky and a bit of sculling is often required.

For those who have got to grips with Hobie Cats and are looking for a little bit more speed, Clark also takes guests out on board one of two X-Treme 26s. A highly patient teacher, she talks us through the different roles on board and lets us all take the helm and, perhaps more challengingly, switching tacks. It’s at this point that I get a taste of the fitness demands of dinghy racing. The combination of strength and balance – to stay on your feet when the yacht is heeling – is not easy to master, and a helping hand from sports instructor JD is required to keep me on board. “People are surprised at how physically tiring it can be,” says Clark. “It’s all about your back and core strength. You are spending a lot of time bobbing up and down on an unsteady surface and making those adjustments in your trunk.”

Despite retiring after the Rio Olympics, fitness is still part of Clark’s routine, especially as she has now turned her attention to the yachting regatta circuit as a tactician and was heading to Les Voiles de Saint Barth after her stint in St Lucia. “I have absolutely loved it but it has been challenging,” Clark says. “In a two-person dinghy you get to a point where you barely have to talk to each other as you are completely on the same wavelength. In a team of eight or nine people suddenly I have to explain and prepare things a lot more. I would love to move up to the superyacht scene eventually.”

To keep in shape for any type of sailing, Clark recommends starting with a basic circuits class. “Once you have got yourself to a level of fitness, you can start to think about your role in the boat and what your limiting factors may be,” she says. “Try and think about your positions in the boat and what is limiting you in them. Is it core strength? Is it quad strength? Is it flexibility in your ankles or knees?”

Despite being relatively fit, Clark’s words and my inability to stand on a heeling boat motivate me to push a bit harder, which is exactly what BodyHoliday is designed for. A vast blackboard is filled with classes so you can take your pick, from the aforementioned beach boot camp to yoga, spinning and meditation. As well as the on-site facilities, St Lucia’s mountainous landscapes provide the perfect fitness playground for running, mountain biking, climbing and hiking. The bold take on one half of St Lucia’s most famous landmark – the Gros Piton. The four-hour challenge is certainly more of a climb than a walk (even if there are no ropes involved) but you are rewarded at the top with spectacular views across southern St Lucia.

There are also opportunities to abseil down the 37 metre gorge of the River Doree or hike Mount Gimie, the tallest point in the West Indies. Every Sunday a handful of guests do the Quadrathlon, an eight mile all-terrain bike ride, a run of over two miles, a 30 metre abseil and a kayak paddle of over a mile. While the distances may sound achievable, few finish – return headwinds on the kayak make it a game for the ultra-fit.

After a busy few days I opt for a slightly more relaxed activity and head out on an X-Treme 26 for a cruise down to BodyHoliday’s sister property – the couple-focused Rendezvous. Sailing down St Lucia’s west coast is a reminder of why the rainforest-cloaked island is a popular superyacht cruising ground. Leaving the bay we sail past the small resort of Cap Maison – location for US television series The Bachelor – and round Pigeon Island National Park. One of the most important monuments of St Lucia’s history, the island was joined to the mainland by a causeway in 1972. It is home to the ruins of defences built by the British and the French as they fought over the island (which famously belonged to each side seven times).

The Rendezvous sits on a slice of perfect St Lucian sand further down the bay. And, after a slight altercation with a rock as we enter the bay, we drop anchor to be picked up by a Hobie Cat and enjoy lunch with our feet in the sand at its beachside restaurant. Our sail back is equally spectacular and a true test of the X-Treme 26’s ability to sail upwind. She makes it feel easy and the return leg takes less than five minutes more than our downwind course to lunch. It goes without saying that it’s a completely different experience from superyacht cruising – decidedly less comfortable but considerably more exhilarating.

Given all the exercise involved at BodyHoliday, one of my main concerns before visiting had been the food – I think super green smoothies are the work of the devil and the idea of being put on a calorie-controlled diet leaves me cold. There are guests who use their holidays as an opportunity to diet or detox but for those with more of a “work hard, play hard” attitude, the resort’s six restaurants won’t leave you hungry. There is a huge variety, from Tao, which serves fusion cuisine with Eastern and Western flavours (don’t miss the tuna teriyaki or crispy duck pancakes) to an intricate five-course tasting menu at Windows. The Deli has an open pantry, which offers healthy energy balls and not-so-healthy but delicious and gooey peanut butter cookies and decadently flaky fudge. During the day, a red flag by your sunlounger can be used to summon a willing waiter to bring you anything from a protein-rich smoothie to a chilled glass of Pinot Gris.

The newest addition to BodyHoliday is its farm-to-table vegan offering – I-Tal. Sitting behind the property’s Coubaril Valley (home to its tennis courts, golf and archery ranges) is a stepped organic garden, lovingly cared for by Rastafarian Damien and his wife Ratoya. We head up the steep slope on a cloudy morning, armed with woven baskets, and pick aubergines, cherry tomatoes, lettuce, coriander, cucumbers and beans for our lunch. At the top of the garden, in a stilted wooden kitchen with panoramic views of the bay, our harvest is transformed into a four-course feast – including callaloo soup, aubergine lasagne and vegan ice cream. Damien’s explanation of his faith as we eat, from the coronation of Ethiopia’s former emperor Haile Selassie to the changing views on the use of ganja among the country’s youth, adds to the experience.

The I-Tal is an example of why the BodyHoliday is more than a fitness retreat, and why its range of guests (celebrity and civilian) is so diverse. The sailing programme is also an excellent fitness motivator. You are unlikely to find me Spider-Man crawling around a London park anytime soon, but it has re-energised my exercise routine and am determined that next time I won’t need a helping hand to stand on a heeling dinghy.

Rodney Bay Marina, which is just around the headland from the BodyHoliday resort, can accommodate yachts up to 61 metres and is the ideal pick-up or drop-off point.

Daily treatments at the vast wellness centre (with 33 treatment rooms), which sits at the top of the property, are also included to ensure that any aches or pains are instantly soothed away.

To avoid St Lucia’s notoriously twisty roads, BodyHoliday can organise helicopter transfers from the airport to the landing strip in Castries (just a 15 minute drive away). Not only will it save you from motion sickness but it also offers a stunning bird’s-eye view of the tropical island. Don’t worry if you like to pack heavy, your bags can follow by car.

For the ultimate privacy (and to avoid being accosted by Strictly Come Dancing stars) opt for the Firefly Villa. Perched at the top of the property it has two suites and a further four bedrooms. Boasting a beach house feel peppered with turquoise touches, the villa comes with its own chef and butler.

Sea spa: Getting into shipshape at St Lucia's BodyHoliday