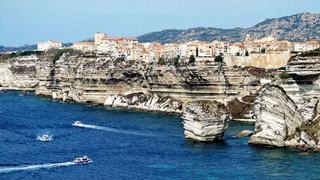 Charter a superyacht in Corsica

Despite its size and proximity to popular cruising destinations, Corsica remains one of the unspoiled gems of the Mediterranean.

The fourth biggest island in the Mediterranean, Corsica lies 90 miles south of mainland France and 60 miles west of mainland Italy. A region of France, the island is approximately 100 miles long by 50 miles wide and has a population of 270,000.

Formed as a result of volcanic activity, Corsica has over 600 miles of coastline and numerous sandy beaches. The interior of the island is mountainous and wild in character, with soaring peaks, deep ravines and an unspoiled beauty rarely found in the western Mediterranean.Mediterranean map

Fact file: Corsica Corsica photo gallery 7 days around Corsica The East and West coasts are very different in terms of geography; the East Coast has a flat coastal plain with sandy beaches but relatively few harbours large enough to accommodate super yachts, while the West Coast comprises mainly of sheltered coves amongst volcanic cliffs plunging directly into the sea.

Although French, Corsica retains a very strong sense of its own identity, and most of the inhabitants consider themselves Corsican rather than French – the Corsican flag shows a black Moor’s head on a white background, as opposed to anything to do with the tricolore.

The cultural identity of Corsica is a blend of French and Italian, influences that can be seen in the local dialect, gastronomy, culture and architecture.

Corsica is blessed with a very pleasant Mediterranean climate, although it can get fearsomely hot in July and August. May and June are generally considered to be the most pleasant months, combining warm weather and modest rainfall (20mm to 40mm of rain per month), and a time when the island is at its most green and lush.

Bonifacio: it’s possible to take a yacht right in to this ancient harbour with its walled town and fortifications high above. In the haute ville – the old town, the Genoese and Romanesque architecture brings Venice to mind – it has the same crumbling charm.

Calanques de Piana: These deep valleys descend to the sea, bordered by towering pink granitic rock formations carved by wind and rain into fantastic sculptures. Although spectacular from the sea, these are one of Corsica’s few coastal sights that are possibly best seen from the landward side. The breathtaking views afforded from shore lie within the vast Corsican National Park which covers almost two-thirds of the island.

Bonifacio: Visit this ancient walled and fortified town for a glimpse into Corsican history.