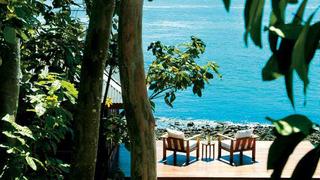 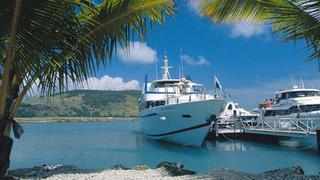 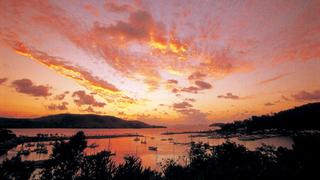 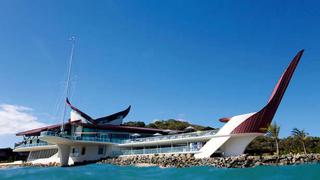 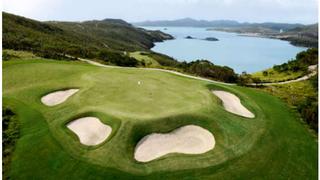 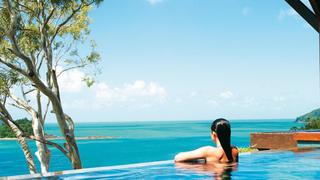 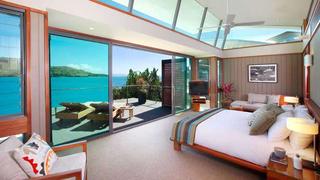 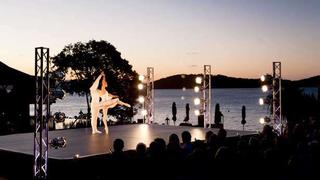 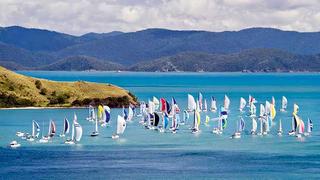 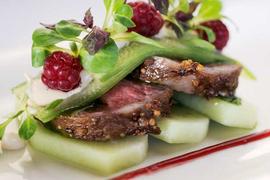 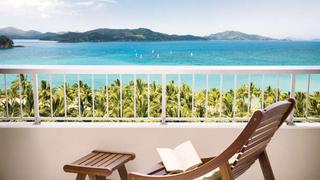 In 2003 the island was bought by the Oatley family, headed by Bob Oatley  internationally recognised winemaker, thoroughbred horse breeder and owner of the famous supermaxi Wild Oats XI, record-holder for the Rolex Sydney Hobart Race  and since then they have given Hamilton Island a comprehensive makeover, transforming it into a world-class resort.

Bob Oatleys vision for Hamilton Island was to some extent influenced by his experiences of Porto Cervo, where he has had a holiday home for 30 years, spending many a Mediterranean summer there. Its true that our wonderful experiences over 30 years in Porto Cervo are influencing some of our decisions at Hamilton Island, he says.

It could be said that some of our plans see us presenting the southern hemispheres answer to Porto Cervo, but very much with an Australian influence. One big advantage we have over Porto Cervo is that Hamilton Island is a lot warmer year round: it gets a lot more sun.

As Australias largest and most impressive tropical island resort, Hamilton Island offers its guests a choice of more than 60 activities as well as a range of accommodation and exceptional food and wine. Among its many attributes is the internationally acclaimed qualia resort, a man-made harbour and marina, the stunningly designed Hamilton Island Yacht Club and a spectacular 18-hole championship Hamilton Island Golf Club with panoramic views from almost every fairway. There is also a VIP concierge service for guests to arrange restaurant and tour bookings as well as island transfers.

Hamilton Island is the only tropical island resort in Australia with its own commercial jet airport serviced by short direct flights from Sydney, Melbourne, Brisbane and Cairns. This means that within minutes of landing, guests can be relaxing at their island accommodation or be boarding their vessel in the harbour. The airport can accommodate private jets and helicopters. Fixed-wing and charter flight services are also available.

When Captain Cook became the first European to traverse the waters of the Whitsunday Passage, he was surrounded by myriad beautiful islands, yet he took note of only one. The great explorer logged: Among the many islands that lie upon this coast there is one more remarkable than the rest. It is of a small circuit, very high peaked 

This prominent and rugged edifice, its cliffs stippled in rust-red and gold, contrasting strongly with a cap of dense green forest, was named Pentecost Island by Cook, and it lies three nautical miles to the south-east of Hamilton Island.

It was not for almost another century after Cook, in 1866, that the Whitsundays were first surveyed and charted, even though many vessels had sailed through the region following the establishment of the first European settlement in New Holland (Australia): a penal colony at Port Jackson (Sydney) in 1788.

Originally it was thought that Hamilton and nearby Dent Islands were one, and it was named Passage Island (hence the name Passage Peak for the highest point on what is now Hamilton Island), but this was amended in 1868. Commander HM Bingham, aboard HMS Virago, is credited with correcting the error and naming Dent and Hamilton Islands after two villages in the UK. However, after much research and years of speculation about the origin of the name Hamilton Island, the most popular theory is that it was named after Lady Hamilton, the mistress of Englands greatest maritime hero, Admiral Lord Nelson.

From grazing grounds to luxury resort

From 1898 to the 1920s Hamilton Island was a sheep-grazing property, and later some crops were established. In the early 1950s the owner of a nearby island acquired the lease of Hamilton Island and erected holiday cottages, but the venture was unsuccessful. It was in 1975 that Queensland tourism entrepreneur, Keith Williams, and a Brisbane car dealer, Bryan Byrt, took over the lease for the island, their plan being to operate it as a cattle and deer-grazing property. However, following Byrts death in 1978, Williams assumed sole ownership and started planning a major tourist resort for the island.

Before long Hamilton Island was Australias highest profile resort, and Williams was in command until 1992. For more than a decade the islands fortunes waxed and waned until the Oatley family was presented with the opportunity to purchase the lease while they were there to compete in the Hamilton Island Race Week regatta in 2003. The rest, as they say, is history.

Hamilton Island Yacht Club is like no other. Inspired by the rich colours of the Coral Sea, Great Barrier Reef marine life, and the soaring silhouette of full sails, this iconic building designed by Walter Barda is an architectural gem  often likened to the Sydney Opera House  and a destination for those who appreciate international boating excellence. It is sited on the edge of the islands 245-berth marina and presents magnificent views across Dent Passage and Whitsunday Passage.

The club restaurant serves exceptional modern Australian cuisine and the open-air bar is the perfect venue for relaxing after a day on the water or on the island. The club also offers a range of state-of-the-art conference facilities and is the base for Australias largest offshore yachting regatta, Audi Hamilton Island Race Week.

The brilliantly designed Clubhouse is ideally perched to catch the soft sea breeze and to take in the stunning island and Coral Sea views. Offering a stylishly relaxed restaurant and bar, the Clubhouse is the perfect place for a long, laid back lunch. The Clubhouse also houses a pro shop, with leading golf brand apparel, accessories and golf club and shoe hire available.

The islands qualia is a uniquely Australian expression of luxury. Pronounced kwah-lee-ah, the word is Latin (and deliberately not capitalised) for a collection of deeper sensory experiences  and that is what it brings to the world of luxury accommodation. Its a truly special place where everything has been meticulously considered to relax the mind yet indulge the senses.

Situated on the sun-drenched and secluded northern-most tip of Hamilton Island, qualia has expansive island and sparkling Coral Sea views. Time unravels from the moment you enter one of its 60 exquisitely appointed pavilions, which sit in perfect harmony with the natural beauty of the Whitsundays.

The ultimate form of relaxation is enjoyed through Spa qualia where authentically Australian treatments rebalance the synergy between mind and body.

The dining experience at qualia is also unsurpassed with its two exclusive restaurants serving fresh and innovative cuisine.

Hamilton Island accommodation is all about choice. From the islands flagship of luxury, qualia, to the boutique beachfront Beach Club; Reef View Hotel with its spectacular views; tropical island-style bungalows; or self-catering holiday homes, there is a range of options suitable for everything from indulgent escapes to energetic family getaways.

Adjacent to the Hamilton Island Yacht Club, the luxury waterfront Yacht Club Villas afford breathtaking ocean views over Dent Passage. With a design emphasis on privacy and space, the four-bedroom, four-bathroom villas provide tranquil serenity yet are within easy reach of everything the island has to offer, making them perfect for family or friends travelling together.

Throughout the year Hamilton Island offers an extraordinary range of special events. Among the most celebrated are:

Hamilton Island hosts a year-round series of food and wine weekends at qualia, featuring some of Australias best chefs. Guests can enjoy a degustation specially prepared for the event and also hone their culinary skills by attending master classes.

Guests can go behind the scenes with The Australian Ballet, and attend an exclusive outdoor performance by the world-renowned dance company at qualia.

Every August yachts from across Australia and around the globe converge on the Whitsundays for Australias largest offshore yachting regatta. In addition to the exciting keelboat racing, a vibrant programme of social events takes place on shore.

In 2010 a superyacht division was introduced to the event and in 2011 motor yachts will also be included.

There is a range of options for dining on Hamilton Island, whether it be enjoying a fine dining experience at the islands signature restaurant, Bommie, or a more relaxed affair at one of the islands other restaurants, takeaway outlets or bars. Uniting factors across all the dining spots are excellent food and wine, a fuss-free aesthetic, and relaxed, professional Australian service.

Hamilton Island also offers more than 60 different activities: cruise to the Great Barrier Reef or nearby Whitehaven Beach; set sail through the Whitsundays; explore over 20 kilometres of walking trails; play a round of golf on one of Australias premier courses; or relax at a day spa or by one of the many pools.

When one of the worlds best-known television personalities, Oprah Winfrey, visited Australia in 2010, her first stop was Hamilton Island, and once there the first thing she did was cuddle a koala at the islands wildlife park. Each day island guests are given the same opportunity, and while there are kangaroos at the park, you will also see them on occasions around the island, especially at sunrise and sunset.

With its year-round warm climate, leisurely lifestyle, and relaxed residential community, Hamilton Island presents the perfect opportunity for you to invest in your own slice of paradise, on an island recognised as the gateway to the Great Barrier Reef. There are over 800 full-time residents that call the island home, bringing a unique social and cultural dimension to the community. From marina-side luxury apartments to secluded luxury homes amongst the tree tops, Hamilton Island offers a varied choice of properties for sale.