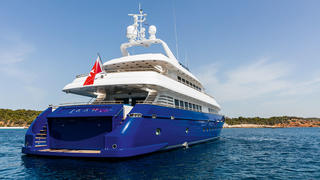 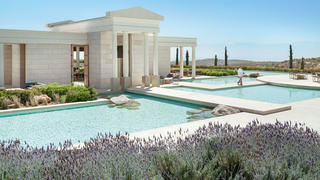 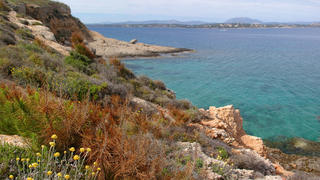 Greece is the Word: Discovering the southern Peloponnese by superyacht

The southern Peloponnese may be known to Athens’ elite, but it’s off the grid for the superyacht crowds. Caroline White explores this quietly sophisticated cruising ground

Guests plunge one after another into the Aegean and push through water the colour of Bombay Sapphire to touch the bottom.

A crew member diving for sea urchins occasionally pops up, grinning from beneath his snorkel, and holds aloft a handful of glistening spines. This spot, Zogeria Bay in Spetses, is a complete Greek island tableau, pine scent beating off the warm rocks, a deep cobalt sky – the only absence is a welcome one: other yachts.

The fact it is May undoubtedly contributes to the serenity, but we are twice as close to Athens as Greece’s superyacht hub of Mykonos – and this is undeniably stunning. The southern Peloponnese is certainly known to Greek royals and the wealthiest of Athenians, but it is still less visited than the Cyclades by big white boats. And that’s not because this mixture of islands and mainland hideaways has less to offer – you may not get those whitewashed villages clinging to mountainsides, and the driest of heat, but neither do you get the vicious meltemi wind that forces yachts into port for days in summer.

Here, further west in the same gin clear sea, you get terracotta roofed towns, rocky landscapes, milder weather, and smart restaurants and hotels. Manolis Vordonis, co-owner of the Poseidonion Grand Hotel, says these islands have a more exclusive, elite clientele than Mykonos: “As well as dancing on the tables, they also want to discover culture, history and religion.”

Our adventure begins at the Mediterranean Yacht Show in Nafplion, where Jaan, captained by Spyros Karalis, casts off for the south. The 42 metre motor yacht is one of a fleet from leading Greek charter agency Atalanta Golden Yachts.

She sleeps 12 guests and has a classic interior of high gloss wood and cream upholstery, a grand but open plan dining saloon and marble en suites, plus a spectacular sundeck. Greek crew, it turns out, live up to the hospitable stereotype. Whereas “western Mediterranean crew can tell you, for example, we can’t do that, it’s too late,” Popy Kaia, charter director of Atalanta Golden Yachts, says, Greek ones like to say yes, while pushing another pastry at you and topping up your Champagne.

After a dip at our first stop in Zogeria, guests are swathed in towels, urchins are shucked and eaten from the shell and the boat motors on to Korakia on the mainland, just half an hour away at a stately speed.

Here we tender into the beach club at the Amanzoe, Greek outpost of the stylish Aman resort brand. The beach club, set on a broad strip of golden sand in the sheltered bay, is a destination in its own right, with four swimming pools, a spa, an informal restaurant serving mezedes (Greek mezze), plus overnight cabanas – a modest term for these sand-side pavilions with their own gardens and pools. Guests are driven up through groves of olive and bitter orange trees, to the resort proper, where the cream Acropolis-inspired colonnades and reflecting pools sprawl over a vast area. There’s a candle- lit library, jasmine climbing the walls and 360 degree views of the Peloponnese.

It’s a serene spot for yacht owners who want a night on shore without venturing too far from their boat. And the 2,850 square metre spa up here is a world unto itself – with a massive gym, warm Watsu pool for muscle therapy, yoga studio with breathtaking forest views and eight indoor and outdoor treatment rooms. The star treatment is called Zoe – a eucalyptus-infused steam bath, olive oil and sea salt body scrub, herbal bath, olive oil massage and laurel oil scalp therapy. Buffed and pummelled, we sip cocktails of gin, grapefruit, mastika and verveine as the sun sets over the lavender gardens.

On Jaan, chef Kostas Kampas serves moussaka with crisp potatoes and paprika, and a very light tiramisu – he likes to give traditional Greek dishes a modern twist.

“I’m quite proud of the fricassee of dorade that I make. It’s fish sandwiched with green herbs inside – a traditional dish that the Greeks normally do with lamb but lighter. It’s something I could eat every day,” he says.

Try Soho for cool modern designs and Diptyque candles. And the Poseidonion Grand Hotel is the traditional pied-à-terre for smart visitors who step off deck. Inspired by the classic hotels of the French Riviera and built a century ago, its green shutters conceal a gallery of contemporary Greek art and elegant pillared reception rooms.

Sipping fresh lemonade in the cool tiled hall, co-owner Vordonis enthuses about building on the hotel’s relationship with the yachting community, thanks to the annual Spetses Classic Regatta – this year 22 to 25 June. “We want to make Spetses a new yachting hub – for guests to start a charter here,” he says. “We have a limo service and two heliports on the island with direct access to either Crete, the Cyclades or local islands.” It certainly seems to be a viable plan – the Poseidonion and Amanzoe have competition in the form of a new Nikki Beach in nearby Porto Heli. Porto Heli is also set to get a 199 berth marina, and there are plans for a chic Chedi hotel with an 18 hole golf course, in the hills of Kilada.

It is a 45 minute cruise to the little island of Dokos, where you’re more likely to bump into a shepherd than an heiress. Its hills offer spectacular hiking, while water bound history buffs can dive the oldest shipwreck site in the world from around 2,200 BC, where a massive cache of amphorae was found.

We continue to the port at Hydra, where locals pause and stare faintly amused as Jaan squeezes into her berth among the fishing boats. We disembark and stroll the pretty harbour, poking around in jewellery shops selling local designs, pass under boughs of bright pink bougainvillea and slowly wend our way uphill for a sunset vista.

Back on the boat someone has apparently mentioned they’d like to see a bouzouki band and – backing up Popy’s assertion about Greek crew – they’ve sent to Athens for one, which arrives by tender in the early evening. Chef Kostas lays on a feast of grand Greek dishes – including several platters of sticky baklava – and guests take their plates to the sundeck to watch the entertainment while crew ply them with tsipouro and perform traditional dances. Popy explains the reason that onlookers traditionally kneel and clap the dancer performing – the dance is a deeply personal expression of emotion and they are honouring it.

The pretty islands and idyllic swimming may be the headline draws to these islands, but it is the warmth of the crew, rather than the water, that makes this lesser-known cruising ground a precious secret.

Find the new Greek Riviera in the southern Peloponnese

7 days cruising on a superyacht from Athens to Rhodes