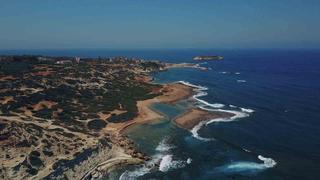 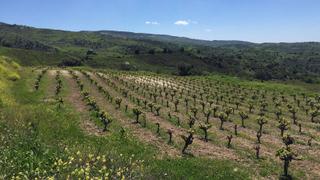 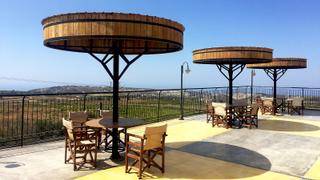 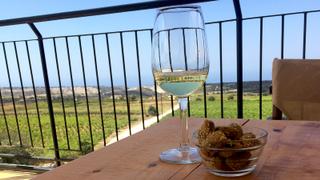 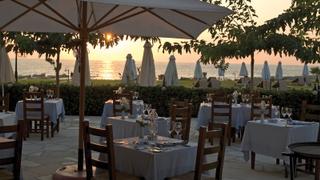 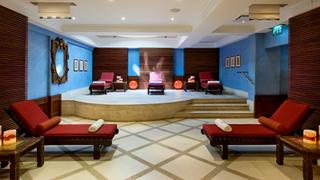 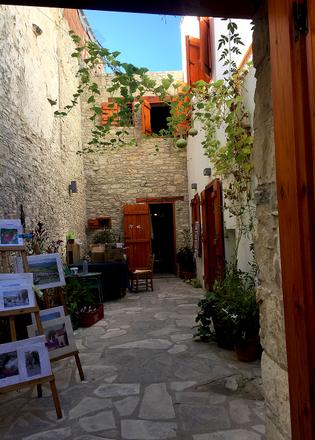 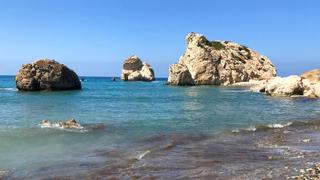 Last of the summer wine: Visit the cellars of Cyprus on a luxury yacht this autumn

Cyprus is known for blazing sunshine that stretches into autumn, sumptuous Eastern Mediterranean cuisine and a rich history. While it’s not currently known for it’s innovative winemaking scene, Elizabeth Finney finds out why it soon will be...

As a group of people dance and jig enthusiastically in one vast wooden barrel, a shock of vibrant grape juice shoots into another sitting half a foot below, which vibrates due to the surrounding traditional Cypriot folk music. The annual Limassol Wine Festival is alive with activity. There are wine tastings in every direction, stalls serving loukoumades (doughnuts dripping with honey) and dozens of people dancing energetically with wine-filled bell bottom bottles and glasses clutched precariously between their fingers. Watching from the sidelines with my own carafe, I’m reeling from the dynamic culture of the place — or perhaps it’s from the surprisingly delicious local red I’m sipping.

While Cypriot wine isn’t well-known internationally, the island has been producing wine for nearly 6,000 years and the local dessert wine Commandaria (also known as Nama) is recognised by the Guinness World Records as the oldest manufactured wine in the world, with origins tracing as far back as 2,000 BC. It is commonly accepted as fact that Richard the Lionheart — who conquered the island in 1191 during the third crusade and was crowned King of Cyprus — declared it “the wine of Kings and the King of wine”.

Though its fortified wines grew in popularity across Europe until the 1970s, the wineries on the island spent most of the 20th century mass-producing cheap wines for the former Eastern Bloc, though this market disintegrated in the 1980s. It wasn’t until more recently that boutique winemakers, such as the Vasilikon and Kolios wineries, started receiving some attention from beyond Cypriot shores.

Nestled between Turkey, South West Asia and North Africa, Cyprus continues to be a suntrap in the autumn months and boasts the contemporary Limassol Marina, which can host superyachts up to 110 metres. Therefore the terrace at the Vasilikon winery, which overlooks the vineyards up in the lofty hills of Kathikas and is just a short helicopter ride from Limassol, remains a perfectly viable spot to while away an afternoon tasting wines and nibbling on olive bread still warm from the oven. “Here we’re at 700 metres altitude, close to the sea, which makes it in idyllic microclimate for growing grapes,” says Aphrodite Constanti, winemaker at Vasilikon, as she shows me the “little library for the winery”, a cool brick cellar with dark bottles stacked high, wooden labels slung around their necks. Working with both foreign and indigenous grapes, the winery has an extremely long harvest. Constanti adds: “We start with the Shiraz and the Cabernet in the first weeks of August and finish with the local varieties, the Xyinisteri, Maratheftiko and Lefkada in October.”

I enjoy a glass of the Vasilikon white — made using the indigenous grape variety of Xinisteri, it is the only white of the four wines produced here. “The Xyinisteri of Kathikas is very particular and special,” Constanti says. “It has such a tropical character — it’s very complex and we only get it from here, this one place.” The crisp, pale peridot of the Vasilikon dry white wine catches the sun flooding the terrace as Yiannis Stefanides, sommelier at the Elysium Hotel, swirls it around the glass fondly. “It’s the only alcohol that is alive, because it continues to mature in the bottle,” he says. “Whisky matures in the barrel, but not in the bottle."

Back in Paphos, with the sound of ocean waves tumbling up and down the private beach, the Elysium Hotel provides an idyllic sanctuary for oenophiles. With sommelier Stefanides on hand to unleash a wealth of knowledge regarding Cypriot wines and a brand-new wine package that whisks guests away to vineyards and wineries during their stay, it’s got the upper hand in offering an experience worthy of Dionysus himself.

I settle down in one of the hotel’s eight eateries, the Mediterraneo Restaurant, for a lunch of local favourites. Oven-baked halloumi with sesame seeds and honey, fried squid, and brimming bowls of Cypriot village salad appear before me, followed by steamed sea bass, slow-cooked lamb kleftiko and traditional moussaka. Stefanides appears regularly with a fresh bottle to pair with each course, starting with an icy dry white from the Tsangarides winery and finishing with an the aromatic Petritis from Kyperounda, both of which boast the familiar fruity kick of the Xinisteri grape.

When not quaffing grape-based tipples, guests can spend the days recovering at the Elysium spa and fitness centre. I opt for a one-on-one Pilates lesson with a Cypriot personal trainer before heading to the spa. The treatment rooms unfurl from behind a sculpted wooden screen and include a gorgeous relaxation room with Balinese-style loungers and herbal teas. The ESPA total holistic body treatment with hot stones, which involves a full body polish followed by a body, face and scalp massage using volcanic hot stones leaves me feeling light and loose-limbed. In an attempt to extend the experience, I float to the sauna, spa pool and steam rooms to spend the rest of the afternoon in total repose.

Once fully revived, I plunge further into Cyprus’ mountainous countryside in search of viticulture relics and other on-shore activities in Cyprus. Prior to visiting the village of Omodos, I head to the nearby trout farm Psilo Dendro for lunch at one of the best rustic restaurants in the Mediterranean. Shrouded by tall leafy trees, my table is bordered by elderly women playing bridge and a cascading river. I relish the rustic atmosphere as I tuck into a large serving of river trout washed down with an unmarked carafe of crisp white wine.

Wandering around the sand-coloured stone streets of Omodos with a belly full of trout after lunch is no mean feet, but well worth the effort. Hilly and winding passageways reveal tiny lace shops, a disused grape press, art galleries and artisan shops selling bread, dried meats and caramel-coated strings of nuts and dates. At the heart of the village sits the Church of the Holy Cross (Timios Stavros) that, according to tradition, was established before St Helen’s arrival in Cyprus in 327 AD and boasts a collection of ancient artefacts, including a section of the rope used by the Romans to bind Jesus to the cross. Though the original domed structure was built in the 12th century, the church now consists of various additions and extensions from the 14th century, but wall paintings from 1171-72 have been preserved.

I enjoy a quick, yet refreshing glass of white at a sunbathed table of the nearby tavern, I hit the road, stopping at the famous Petra tou Romious, or Aphrodite’s Rock. Supposedly the birthplace of the goddess of love, legend says that if you swim around the rock three times anticlockwise at midnight you will look younger and more beautiful. Rather than waiting around until midnight, I take my chances and head back to the Elysium for an extraordinary supper at Ristorante Bacco.

After another wine tasting session with Stefanides, courtesy of the Kolios Winery in the high-walled courtyard, I'm presented with a mouth-watering seven-course extravaganza. After a feast of beef carpaccio, seared diver scallops and prawns and a herb-crusted rack of lamb, the show begins. The locally-famed pastry chef Robert Pap removes the tablecloth and stars decorating the clean surface with elaborate swirls of chocolate, before carefully positioning no less than 50 bite-sized treats into the design. There is gold honeycomb, dark chocolate mousse and white chocolate cream in a sugar glass with fresh berries, though none can compete with the centrepiece, a huge chocolate orb containing fluffy vanilla ice cream, melted from above by a jug of molten chocolate. The entire meal is accented by the delicious offerings of the Kolios Winery, and the finale is complemented by my personal favourite, a white wine entitled Iris, which uses the indigenous Spourtiko grape and was named for owner Marios Kolios' grandmother.

Despite being a popular summer superyacht destination, Cyprus is not currently frequented by wine connoisseurs — thankfully, this is changing. The collection of boutique wineries that have sprung up in recent years give the island some much-deserved gravitas, a way to share its vibrant traditions via its historic love of wine — making it the perfect spot to pick up a few cases to enjoy on board while cruising around the Eastern Mediterranean.

For millennia, humans have come together over a glass of their favourite tipple to share stories, debate opinions and put the world to rights. In Cyprus, winemaking and culture are inextricably intertwined and Cypriots are only too delighted to share both. “Wine is for sharing,” Stefanides tells me on my final evening. “The philosophy of wine is to share with friends.”