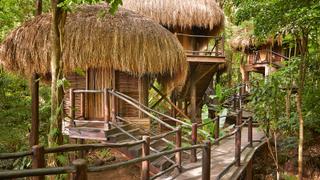 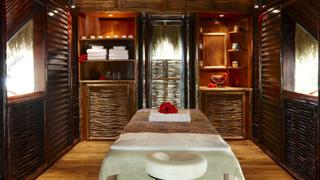 Wedged between St Lucia’s UNESCO World Heritage-listed Piton mountains, many consider the location of Sugar Beach resort to have restorative powers (it was one of the most sacred locations for the island’s early inhabitants, the Arawak Amerindians, nearly 2,000 years ago). If you need more than geography to help you unwind, the spa’s eight treehouse treatment gazebos and steam room – warmed by volcanic spring water, with the natural soundtrack of a flowing waterfall – should do the trick.

More than $100 million has been invested in the super-chic resort since the original site, built on the La Jalousie plantation in the 1990s, was taken over in 2008. The latest additions are two ultra-modern beachfront residences – honeytraps for Hollywood A-listers looking to hide behind more than just their sunglasses while in the Caribbean.

Charismatic British owner Roger Myers – who founded the Café Rouge chain – swears by the spa’s signature hot stone massage, which uses locally sourced volcanic stones to create penetrating heat to relieve stress. Or for more of a pummelling opt for the Royal Bamboo Massage: three different sizes of bamboo sticks are rolled in soothing movements across your body for deep tissue relief.

Contact the National Park authorities to make use of one of the mooring balls that sit in the bay in front of the hotel and then tender in to its private jetty. Once ashore, one of the property’s vividly coloured tuk-tuks will whisk you up the hillside to the spa, which is hidden in thick tropical vegetation.

Sea Spa: Silence in the city at the Four Seasons New York Downtown