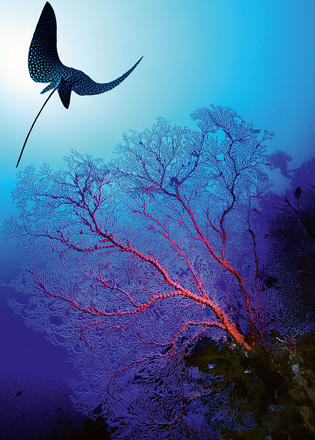 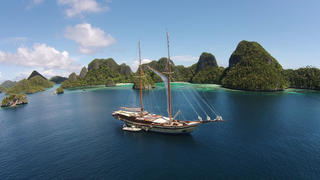 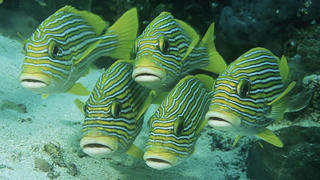 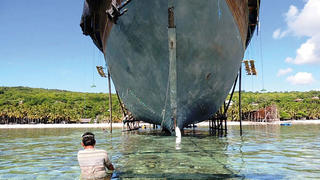 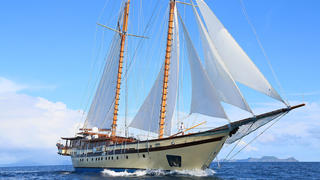 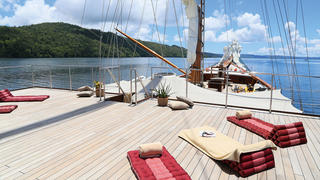 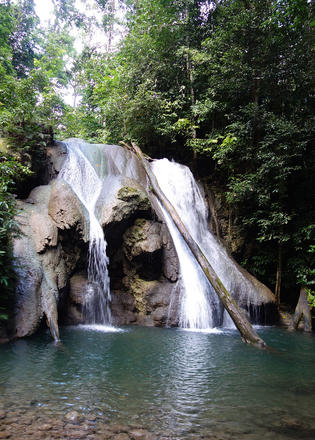 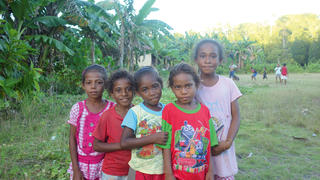 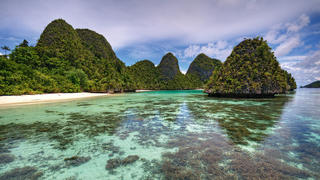 Discovering Raja Ampat on board an Indonesian phinisi

I somersault backwards into the water and descend to the sandy bottom. It is eerily barren here, nothing stirs, the lack of colour magnified by the startling visibility. In a place as acclaimed for its macro life and vivid coral as Raja Ampat, Indonesia, this is a strange dive site indeed. But we’re here for a reason and follow our dive master’s lead, inching ever deeper along the blindingly white seabed, until he motions us to stop. This is the spot.

Like an expectant audience before curtain-up, our dive party settles, knees digging into the fine sand, hands grasping rocks on the ocean floor, waiting for the show to begin. It’s not long before the first performer takes to the stage, a white-bellied manta ray with an enormous wingspan that glides into view above our heads. Soon she is joined by a partner and together they cavort in seemingly choreographed movements. A third, an intimidating black manta spanning four metres, with flashing white gills, swims up to take his turn.

As many as a dozen pirouette through, trailed by the tiny wrasse that dart and nibble at the mantas, for this is the place, aptly named Manta Sandy, where these ethereal sea giants flock to be cleaned. It’s an extraordinary sight, and one that we witness in complete isolation – no tourists vying for the best view, no other dive boat to scare off the shy performers with the roar of its engines and certainly no other superyacht. It’s what we’ve grown accustomed to this week travelling on the 65.2 metre sailing yacht Lamima. Here, among these remote Indonesian islands, it’s easy to feel as though you’re alone at the edge of the world, and with good reason. This is, after all, one of the last undiscovered stretches of earth, one of the very last virginal cruising grounds.

“When people think of Indonesia they think of Bali, but actually we’re out here by Papua, another country entirely,” says Arie Pagaka, Lamima’s indispensable cruise guide.

Leaning over a map spread out on the dining room table, he points to Bali, way over in the south west of the country, then draws his finger diagonally to where we are in the far east of Indonesia. Raja Ampat is as far removed from Bali as you can imagine – both the opposite of its Westernised ways and physically set at the other end of the island nation. It’s challenging to get here – though flying in by private jet from Bali to meet the yacht in Sorong makes it considerably easier – and impossible to explore without a boat. Because of strict regulations, only local yachts are for charter in Indonesia, and a handful of luxury phinisis – traditional two-masted boats – have ruled the industry for some time, but Lamima, the largest phinisi ever built, has been designed to stand in a class by herself. The existence of this superyacht-sized phinisi plying the far-flung waters of eastern Indonesia is down to Dominique Gerardin, former captain of 72.5 metre Dunya motor yacht Axioma, who discovered this part of the world during a holiday in Indonesia’s West Papua.

“We were in a passage between two islands, surrounded by the massive trees of the rainforest, full of birds; crystal clear waters full of fish – and nothing around for miles,” he says.

“As a society, we are so far removed from the natural world. It was the first time I felt I was in real nature.” Cruising these same waters on Lamima, there’s no doubt we are in real nature: lush, primordial forests ring the shores, crystalline waters beckon, and the only sound is that of the birds cackling in the trees. At night, alone in the anchorage, far from city lights, the sky is awash with stars. I’ve seen nature before, but not like this.

This is the intended response. The aim of the boat is to connect the superyacht set with this undiscovered world. “You open a new horizon to all these people. They can see this area in a traditional way, on a traditional boat, with a traditional crew, but with superyacht standards,” Gerardin says of Lamima, which he co-owns with an Axioma guest-turned-friend.

Lamima’s size has allowed us to sidestep the typical cruising schedule and Gerardin gives me a little tip: the best time to visit Raja Ampat is between March and June, when there are no dive boats or rain. “Other people will say November to February is best, because if you don’t make the crossing to Komodo before March, the sea becomes choppy. But we don’t have that problem. We can handle big seas and can even cross in July.”

Lamima started life much like other phinisis, born on a beach and handcrafted in wood by the Bugis tribe, which has been creating Indonesia’s sailing craft for generations. Phinisis are built keel first, followed by planks, with the frame coming last. It took 50 men two months to drag Lamima to the water, finally floating at the optimal high tide. Before this, she was consecrated in a traditional Bugis ceremony.

“They kill a bull and its blood goes into the stem of the boat – for Lamima they used a buffalo because it is a big boat. They do this for strength,” says Gerardin. “Then they take a drop of blood from a black chicken and put it on the keel and then throw the chicken as far away as they can to chase away the bad spirits. A golden ring is also placed in the keel for good luck, and she’s blessed by a priest.” Lamima is RINA certified, an unusual achievement for a non-traditional yacht like a phinisi, and the society was on-hand for this unorthodox launching ceremony.

Unlike other phinisis, she is a superyacht in size, finish, layout and amenities – including the fully outfitted dive centre capable of PADI certifying divers. This was a priority as Raja Ampat has some of the best scuba diving spots in the world. I’ve dived in Belize’s Great Blue Hole, the Galápagos and the Caribbean, but I’ve never encountered anywhere quite like Raja Ampat.

The diversity is stunning, from the tiniest pygmy seahorses to giant coral forests – huge purple fans and brain coral that dwarf humans. There are 1,400 species here and the US-based charity, the Nature Conservancy, has called Raja Ampat “one of the most diverse reef systems on earth”. That it’s also a protected shark and reef sanctuary is a draw as well, making it a must-see for anyone exploring the Raja Ampat archipelago on a luxury yacht.

After an exhilarating dive, we are welcomed back on to Lamima’s ample forward deck where lunch awaits. The afternoon is for relaxation, and while some guests sprawl on the sunpads or hide away in the shade, I visit the open-air superyacht spa, to stretch out under the silky sheets and enjoy a Balinese massage by one of Lamima’s two excellent masseuses. Before I know it, we are moving along to the next destination, enjoying a view that seems stolen from a tropical calendar, one pristine deserted island after another, pages turning as we cover miles.

Raja Ampat’s solitude invites exploration, with every anchorage, island and hiking trail yours to discover alone. I trek to hidden waterfalls, bathing in refreshingly icy deluges. I awake before dawn and tiptoe through the forests of Gam Island to spot the rare red bird of paradise, its distinct call signalling its presence high in the treetops. On Wayag Island, I climb to the rocky summit, the arduous trail worth every step for the breathtaking view. In the harbour below, it looks as if a giant has thrown a handful of jade stones across the shallow turquoise water. At dusk we explore these little green islands by tender, before landing on a beach where the crew have sundown drinks waiting. Lamima’s 20-strong crew offer superyacht service but with a warmth that is particularly Indonesian. After sunset a bonfire is lit, guitars appear and we find common threads in the form of song: Michael Jackson, the Beatles and the Eagles’ Hotel California.

A plume of smoke from a slanted roof, hidden behind palms, signals that not all islands here are uninhabited and the next day Lamima pulls up to a local school. As we enter the harbour, children run down the beach to see the big boat. The entire village has gathered, men and women, children and babies. They are adorned for the occasion in headdresses and erupt in song. A child grabs my hand and leads me through the procession, dancing up and down the dock. Inside the school, where the village chief and Arie are serving as interpreters, we are soon answering as many questions as we are asking, fielding queries about David Beckham and which football teams we support.

Outside, a tour of the village reveals an almost equal split: to the left are the Bajau – sea gypsies – and to the right, the Protestants. Their places of worship, a mosque and church, respectively, tower over each ramshackle gathering of homes. Arie says the villagers live in harmony, despite their cultural and religious differences and we are quickly welcomed into their midst, as we kick off our shoes to join the children in an impromptu game of football, on the grass and rock strewn pitch. We don’t know who wins, but it doesn’t seem to matter.

We leave them with games, colouring books and clothes, and it’s hard not to wonder, at the rate the world is shrinking, how long it will stay this way. I say a silent prayer that this will remain the last frontier, ready to be discovered, but only by those who dare to somersault backwards into the unknown.

3 of the best remote destinations to visit by superyacht