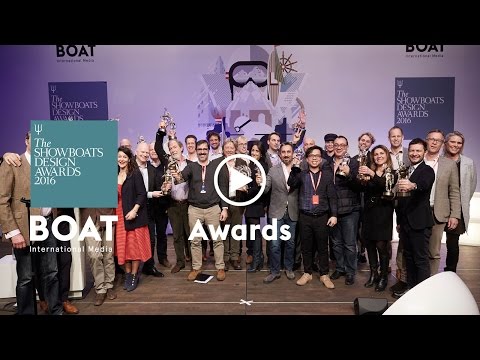 The winners of the 2016 ShowBoats Design Awards were announced in a ceremony last month in Austria. Sixteen coveted golden Neptune awards were presented by double Olympic gold medallist, Shirley Robertson OBE, in front of a sell-out audience of superyacht owners, designers and icons of the superyacht industry from around the globe.

The evening's big winners included Baltic sailing yacht Nikata, taking four Neptunes. Her first award was for exterior design and styling, by Nauta Design, followed by a win for her interior layout and design by the same team. Her Judel-Vrojlik-designed naval architecture earned her a third joint win, followed by another gong for the best holistic design of a sailing yacht.

Feadship motor yacht Savannah picked up three ShowBoats Design Awards trophies, winning in the exterior and interior design categories, thanks to CG Design, as well as picking up the award for best motor yacht holistic design. Savannah was also shortlisted for the naval architecture award for motor yachts over 500GT, which went to Amels’ Madame Kate instead.

The naval architecture award for sailing was one of the hardest decisions the jury faced. Eventually they named two joint winners – Nikata and Topaz. “Because redrawing a classic yacht to meet a modern racing rule is a rare task, the jury chose to award a second naval architecture prize to Topaz,” they explained.

In the motor yacht categories, the naval architecture for a yacht under 500GT went to Alia Yachts’ Rüya, who also won the Interior design and layout award for motor yachts below 500GT. BenettiIron Man scooped up the gong for the best naval architecture on a semi-displacement motor yacht, whilst HeesenSibelle won a Neptune for her AB Studio/Omega Architects-designed exterior.

The tender design award was awarded to the 11.4m limo tender Embarked on Infinity. Designed by Michael Peters and builder Hogdon Yachts, with naval architecture also by Michael Peters, this tender beat 11 other entries to steal the Neptune.

The full list of winners, with comments from the jury, is online.

The Young Designer of the Year Award, in association with Oceanco, went to Baoxi Xiao, for his Cercio concept. Despite 28 very high quality entries, it was Xiao’s ability to accurately meet the brief that earned him the accolade. The judges particularly admired the clear presentation and well-executed hand-drawn sketches. They also felt the originality and harmony of the exterior styling blended well with a highly competent general arrangement plan and understanding of the client’s lifestyle.

Boat International Media takes this opportunity to acknowledge all of the sponsors and partners of the 2016 ShowBoats Design Awards who have helped to make the event a resounding success. Special thanks are extended to our gold sponsor, Tai Ping, and to silver sponsors Blohm+Voss, MAST, Centtrip, Fincantieri and Kymeta Panasoci. Thank you to Oceanco, who continue to support the Young Designer of the Year Award. Our gratitude also goes to our event associates: Foil, MTN, Videoworks, Clyde & Co, DKT Artworks, Boutsen Design, JFA, Cantieri di Pisa and RINA.