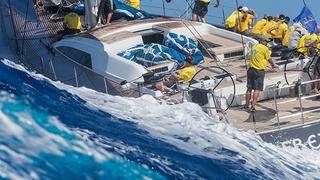 With clearing skies and a building breeze, the final day of the Loro Piana Caribbean Superyacht Regatta – Embraer Race Day – was shaping up to be a monster. The overnight standings in both classes meant that several of the superyachts were in with a chance of overall victory, and with the close finishes of the previous race days anticipation was high of a dramatic conclusion.

The race committee sent the fleet anticlockwise around Virgin Gorda, with a downwind start, and it was Bolero – at 22.4 metres, the smallest yacht in the fleet – who got the racing underway closely followed by one of the largest, the 53 metre Perini Parsifal III.

As the fleet made its way down the downwind leg and on to the reach to Round Rock at the western end of Virgin Gorda, individual battles started to develop. Wisp and Marie, who have been battling all week, renewed their duel. ‘We knew the course was going to favour Wisp on the beat up the back of the island,’ said Tony Rey, tactician on the 55 metre ketch Marie. ‘We knew we had to get them on the downwind leg and we managed to roll them but it wasn’t enough.’

As the fleet turned on to the beat to the south of Virgin Gorda, the going got rough with two-metre waves creating an additional headache for crews and tacticians. ‘It was like doing motocross in a school bus,’ Rey continued. ‘It was all about dodging the waves and trying to figure out how to get over them!’

Nearing the eastern corner of Virgin Gorda, the Class A fleet had compressed and the yachts were trading tacks. Ganesha and Inoui rounded the point line abreast.

For Class B, the last leg was a straight downwind run past Necker, and it was Seahawk who hit the line first, scoring her second bullet of the regatta just over a minute ahead of Wisp, who had in turn scored her first win over Marie.

The Class A fleet had a final leeward mark to round before a short beat to the finish, and as the yachts closed in on the line P2, the Southern Wind Cape Arrow – helmed by Pier-Luigi Loro Piana – and Freya were side by side. P2 had pulled just enough out to take the gun just 34 seconds ahead of Cape Arrow, who scored a creditable second place just five seconds ahead of Freya.

With overnight leader Inoui only managing fourth, it was P2’s day and with two bullets and a third she would take not only Class A, but also the Loro Piana Prize: Boat International Media Trophy for the lowest scoring yacht of the week. ‘I have to compare this win to yesterday,’ said P2’s emotional owner, Gerhard Andlinger. ‘The crew said “we did it yesterday, why can’t we do it again today?” and that was the spirit on board. I have a great crew and this victory is theirs, not mine. I am very, very happy.’

Also happy were the crew of Marie, whose third place today secured them first place overall in Class B. ‘This kind of racing is spectacular,’ said Tony Rey. ‘The ORCsy rating rule couldn’t ask for a better soft launch. This event at the Yacht Club Costa Smeralda Virgin Gorda was absolutely spectacular.’

For the Royal Huisman yacht Wisp, this was the first regatta the yacht and her owner have done. ‘It’s the first time the crew have sailed together, and we’re extremely happy,’ said Rondal’s Paul Dielemans who was helming Wisp this week. ‘The wind conditions were very good for us and it really worked out well with lots of close finishes. Doing the Loro Piana as a first event was great – the right wind, and the right boats. Our second place is also remarkable – this is a yacht built for sailing around the world in comfort and for any owners out there who are hesitant about doing this event, I can tell you for sure this owner is 100 per cent happy.’

It was Pier-Luigi Loro Piana who summed up the sentiments of all competitors at the afternoon’s prize giving. ‘I think it was a spectacular, beautiful week,’ he beamed. ‘Watching what happened this week I’m sure there will be more and more yachts joining us here.’

As the event drew to a close, there was time to reflect not only on the Champagne conditions, but also on the extraordinary racing that the ORCsy rule has created. With some of the closest finishes seen in superyacht racing, there is little doubt that the new format creates the sort of thrill that owners and their crews are looking for. ‘We had a few different winners and close finishes,’ said Tony Rey. ‘That’s what we want, and that’s what we got.’

The prizes were awarded as follows:

Spirit of the Regatta:Parsifal III

For a full report on Embraer Race Day’s racing, and to see galleries and videos from the event, head to the Loro Piana Caribbean Superyacht Regatta website.

The event returns to the YCCS Marina in Virgin Gorda from 9 to 12 March 2016, and dates have already been announced for the the 2017 edition, which will run 8-11 March.