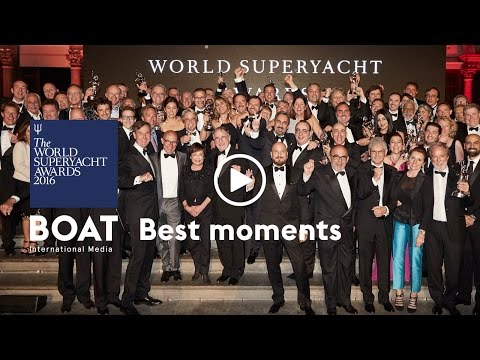 Video: Inside the World Superyacht Awards 2016

The 2016 World Superyacht Awards took place in Florence from May 13-15, with the gala event attracting the industry’s leading designers, builders and owners.

Now in its twelfth year, the World Superyacht Awards celebrates the finest yachts in a variety of categories, including rebuilt and refitted yachts, as chosen by an independent jury of superyacht owners.

Key winners this year included Unfurled and Savannah, which won the sailing yacht and motor yacht of the year categories respectively.

Watch the official video from the 2016 World Superyacht Awards below:

Another notable winner was Latitude, which scooped the Voyager’s Award after cruising 11,000 miles from Fort Lauderdale to the Pacific Ocean, via Greenland and the Northwest Passage. Owner Anil Thadani was particularly keen to spot polar bears and he saw 19 of these magnificent creatures on his journey.

Meanwhile, the Legacy Award went to multiple Royal Huisman owner and philanthropist Jim Clark. Alice Huisman from the Dutch yard added: “Jim’s boldness and love of innovation, his challenge and motivation mean that every yacht he has created has been a masterpiece of its genre. His impact on our entire industry – inspirationally as well as technologically – is without equal.”

Guests at the 2016 World Superyacht Awards were treated to a three-day cultural programme, including welcome cocktails at the Uffizi gallery and guided tours of Florence before the gala dinner and after party at the Palazzo Vecchio. Historic artwork on display included the Genius of Victory by Michelangelo and the Deeds of Hercules by De Rossi.