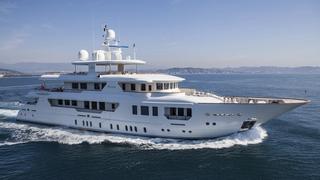 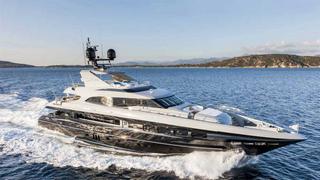 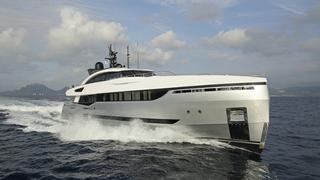 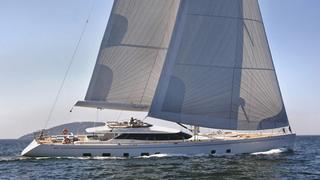 The 45 metre superyacht Pride is currently listed for charter with Hill Robinson, and she is nominated for a World Superyacht Award in the Displacement Motor Yacht of below 500GT category. Lloyds classed and MCA compliant, she was built by Viudes Yachts with naval architecture by Isonaval and delivered in 2013. Her design offers extensive deck spaces, including a voluminous sundeck and beach club. An efficient interior design accommodates 12 guests in six cabins: a full-beam master suite with two side balconies, a full-beam VIP stateroom, two doubles and two twins. All staterooms have en suite bathroom facilities.

Pride is powered by twin Caterpillar C-32 engines giving a top speed of 14 knots, a cruising speed of 12.5 knots and a range of 5,200 nautical miles at 10 knots.

Superyacht Nameless is a custom aluminium motor yacht built on a successful 40 metre platform by the Italian yard Mondo Marine and is a collaboration between Mondo Marine and yacht designer Cor D Rover, who was responsible for the yacht's naval architecture and exterior styling. She is nominated for a World Superyacht Award in the Semi-Displacement or Planing Motor Three Deck Motor Yachts from 30m to 44.99m LOA category.

A large salwater swimming pool dominates the sun deck and there are numerous areas for alfresco dining. Nameless accommodates up to 12 guests in five staterooms. The full-beam master suite is located on the main deck, while all the other guest cabins are on the lower deck, including two full-beam VIP staterooms, plus a double and a twin, both with Pullman berths. All have full en suite bathrooms.

Also nominated for a World Superyacht Award in the Semi-Displacement or Planing Motor Three Deck Motor Yachts from 30m to 44.99m LOA category, the 40 metre Columbus 40S Hybrid superyacht was built in aluminium and launched by the Italian Palumbo yard in Naples. She features naval architecture, exterior styling and lines by Sergio Cutolo of Hydro Tec, while the interior design is by the yard team in collaboration with Italian studio Hot Lab and the owner.

The main deck master suite features an office, large dressing room, and an en suite with a huge double-head shower. There are two guest cabins and an aft VIP staterooms on the lower deck  this can be turned into two cabins by pulling a sliding screen through the middle of the cabin and pulling a bed down from the wall of the cabins sitting room. Throughout the yacht the colour palette is neutral, in browns, creams and whites. Fitted with two diesel and two electric engines, the yacht can be operated as a conventional diesel vessel or a hybrid diesel electric one and a third option is all-electric power.

The Columbus 40S Hybrid is for sale through Ocean Independence and Burgess with the price listed at €14.8 million.

Dubois Naval Architects and Oyster worked together to design the 38.1 metre Oyster 125 sailing yacht Twilight, launched by Turkish superyacht yard RMK Marine, which is nominated for a World Superyacht Award in the Sailing Yacht in 30m to 40m size range.

The design brief was for a concept that could carry superyacht luxury and style but be capable of being built as a production yacht, with greater efficiency and speed. Twilight is a powerful composite performance cruising yacht with a stunning open plan split-level living area. Composite construction removes the need for a painted finish, significantly reducing maintenance costs and does not require the framework required in an aluminium-hulled yacht, thus optimising accommodation volume. The upper saloon offers panoramic views, and accommodation is for eight guests in four staterooms: a master suite, two double staterooms and a twin cabin. The interior is in teak and light oak and all staterooms have en suite bathroom facilities.

Twilight was built to Lloyds class and is MCA compliant, she is for sale asking €11.85 million at Camper and Nicholsons.

The 41.83 metre sailing yacht This is Us is a finalist in the Refitted/Rebuilt Yacht category of the World Superyacht Awards and is offered for sale by Ocean Independence asking €7,950,000. Exterior lines and the interior are the work of Andre Hoek and she was built by Holland Jachtbouw to Lloyds class with delivery in 2005. Her interior woodwork is in cherry with wenge flooring throughout the spacious saloon with cream leather covered U-shaped seating and a coffee table. Opposite is a new Loewe 46 inch High Definition television, a Samsung Blu-ray DVD player and amplifier.

Accommodation is for eight guests in four staterooms. The master suite is on the main deck and below is a VIP stateroom and two cabins - all with televisions, Blu-ray DVD and en suite bathroom facilities. On deck, there is a comfortable and sheltered cockpit between the helm and pilothouse with a folding dining table and Bimini top protection from the sun. A very popular yacht on the charter circuit, sailing superyacht This is Us proved her racing credentials by winning the 2012 St Barths Bucket.

Under power, a 425hp Lugger engine delivers a range of 2,500 nautical miles at seven knots. This is Us received a thorough refit at Holland Jachtbouw from June to November 2013 and now presents in immaculate condition.