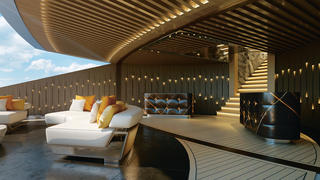 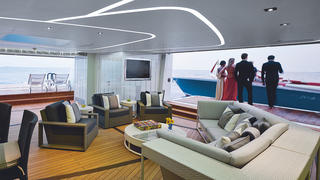 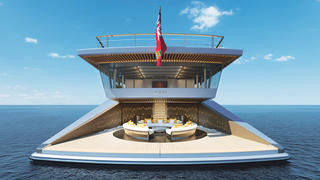 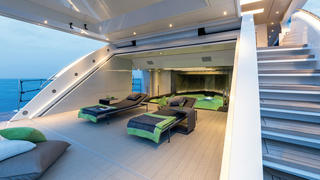 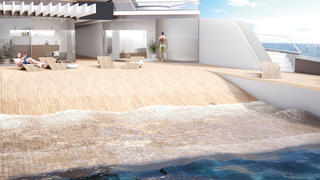 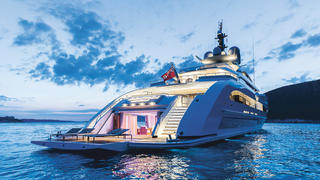 No self-respecting superyacht can do without a beach club these days, but the fashionable feature has come a long way in the past two decades. Claire Wrathall dangles her legs in the water...

Ask the yacht designer Dickie Bannenberg to define “beach club” in the context of a yacht, and he almost demurs. “I guess the word ‘beach’ is the misnomer here,” he says, calling to mind as it does thoughts of pale sand, whispering palms and indeed languorous lunches at Le Club 55 near Saint-Tropez or an outpost of Nikki Beach.

“Really it’s just a relaxation space with the formality dialled down and the sense of connection to the sea dialled up,” says Simon Rowell, the other half of the partnership Bannenberg & Rowell, whose 70 metre motor yacht Joy won the prize for Best Exterior Design and Styling - Motor Yacht Above 48 metres at this year’s ShowBoats Design Awards. The Feadship’s large transom door rises to provide shade for the aft bathing platform, revealing a comfortable, beanbag-filled space that also serves as a cinema – hence the immense video wall – and nightclub.

The fashion for beach clubs has parallels in the vogue for open plan living on land, as sitting rooms, dining rooms and show kitchens have fused to become one large unified domestic space. They have come a long way since the early 1990s, when Lady Moura first revealed her “beach” – two hydraulic platforms that folded down from the hull to reveal a cabana and provide a swimming platform, on which real sand was spread.

Where once onboard beach clubs were converted from lazarettes or garages with retractable swim platforms that slid out over the ocean from cassettes contained within the deck, they are now increasingly integrated into the yacht’s principal living spaces and resemble something more akin to the veranda of a beach house, complete with bar and sunbeds, from which you can dive – or lower yourself – directly into the water.

“You want the beach club to be part of the whole boat, to connect with the rest of the deck and the interior,” says Rowell. “It’s a proper architectural challenge.” And also a fun one. “We’re trying to get sand over quite a large floor on one very large project we’re working on,” he continues, “although we may have to put it under glass so it doesn’t get walked over the rest of the boat. So it may end up being a visual and textural thing rather than something to put your feet in.”

Dedicated beach clubs are not, however, exclusively the preserve of the bigger superyachts. The designer Claydon Reeves, whose yacht Solis won her category at last year’s World Superyacht Awards, has found a way to incorporate “a pretty decent beach club” into a 36 metre yacht currently under construction at the Mulder Shipyard in the Netherlands, without requiring it to double as tender or toy storage.

“It’s not entirely simple that you take your tenders out and you have a beach club,” says founding partner Mike Reeves. Even if the chocks recess back into the deck and the crane can be discreetly stowed, a garage is still an essentially industrial space. “Invariably,” he continues, “when you bring a boat out of the water there will be a little diesel slime on it that drips on to the deck, which the crew will have to clear up. And what do you do when the tenders aren’t out?”

His solution has been to put the tender garage athwartships and the beach club behind it on the aft deck, which they have kept as close as possible to the waterline and which is large enough to accommodate a bar area, dayhead, space for a massage table and spa treatments and storage for towels. Beyond the deck “a platform pivots out from the bottom edge to make a larger space just above the water that you can sit on”. To reinforce the sense of a unified space the decking is laid in a pattern that extends beyond retractable glass doors into the interior spaces “so you get the idea of the inside and outside merging”.

The evolution of beach clubs is the most overt example of a broader trend towards blurring indoor and outdoor spaces on board. “On Solis, we tried to make the transition between the saloon and the aft deck invisible,” says Reeves. “We decreased the height of the balustrade and used glass bulwarks.” Cut-outs in the sofa backs also draw the eye out to sea.

There’s a reason, then, that so many of the designers that the venerable manufacturer of marine-grade deck furniture Summit collaborates with are producing pieces that can be seen through. Take the sofa, lounge chairs and glass-topped coffee table that Linley has created for Summit, Mark Anders’ art deco-influenced sunbed, and Brian Kane’s bar chairs and chaise longue.

The colours of the décor can reinforce the sense of unity too, with earth tones to echo the teak deck, and turquoises and sea greens that speak of the seascape. Certainly the latter are evident in the range of woven outdoor seating by Italian designer Paola Lenti and showcased by Sabrina Monteleone, founder and proprietor of Sabrina Monte-Carlo, the Côte d’Azur’s go-to emporium for deck furniture, furnishings and table settings, when the pair collaborated on the Upper Deck Lounge at last year’s Monaco Yacht Show.

They were evident too on Galactica Super Nova, the 70 metre Heesen-built yacht designed by Monteleone’s partner Espen Øino, which also won two major prizes at the 2017 ShowBoats Design Awards, including the Judge’s Special Award. Her stern and side terrace can be transformed into a 44 square metre beach club, partially sited below the six metre glass-bottomed infinity pool, which filters light into the covered area with a lit-from-within bar, equipped with a Kegerator, so that crew can serve draught beer. At night it becomes a party space, with mood lighting and a DJ station.

Ultimately the scope for what is possible in an onboard beach club is limited only by the imagination. With just two decks, the yacht concept Zen (an 80 metre Feadship with Sinot interiors that was unveiled in Monaco last autumn) stands to break new ground in so far as its barge-like shape maximises the size of the principal living space, which sweeps down to a single aft deck/beach club set just above the water.

Hareide Design Norway’s renderings for a projected 108 metre open plan vessel, with a garden at its heart and a 20 metre swimming pool, are more extraordinary yet. Its lower aft deck slopes into the ocean so that the edge is lapped by waves you can paddle in. In the words of its designer, Einar Hareide, “We wanted to create a platform for experiencing the beauty of nature and the changing elements.” It may be far-fetched, but it reflects current desires. For isn’t a desire for proximity to the ocean the principal reason for wanting a yacht? In which case scope to dangle one’s feet in the water from the boat ought to be part of the package.