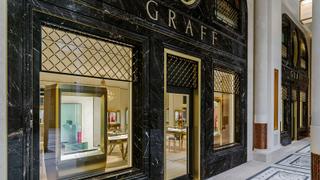 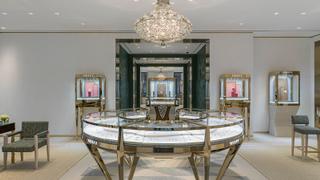 Inside the new Graff boutique at the Hôtel de Paris, Monaco

London-based fine jeweller Graff has opened a new Monaco store in the recently refurbished Hôtel de Paris. The 210 square metre space is the house’s second boutique in the principality, with the first occupying a prime space in the Casino du Monte Carlo.

Along with Graff’s famously exquisite jewels, the new boutique also offers those in the Monaco area some serious interior design inspiration. The store sports the traditional Nero Saint Laurent marble façade of the hotel with an interior inspired by the brand’s Peter Marino-designed concept store in Bal Harbour, Florida. In a nod to the architect’s preference for natural materials and detail-oriented design, the floors of each of the boutique's two salons are decked out in Portland stone with Green Vals accents in an understated geometric pattern.

Each salon also features a statement Mark Brazier-Jones chandelier crafted from thousands of glass ‘cabochons’ inspired by the world-class precious stones surrounding them. Further bespoke touches in the salons include custom wall coverings in a neutral palette and handmade silk, wool and sisal rugs to lend a luxurious air.

In the discreet VIP room an unusual design choice sees the walls covered in panels of pale green parchment hand-painted using three shades of celadon – a traditional glaze more commonly associated with greenware pottery. The effect is a calm and inviting space further enhanced by rock crystal lamps, aqua-hued club chairs and freestanding bronze vitrines in which are housed Graff’s most precious creations.

The boutique’s final space is devoted to its collection of timepieces and is similarly unusual thanks to its shape, which mirrors that of an emerald-cut diamond. The star feature of this room is a bronze showcase designed by André Dubreuil which, when complemented by the space’s muted green colour palette, provides a stylish environment in which to highlight Graff’s fine watches.

The Best Boutique Shops in Monaco