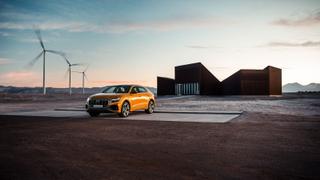 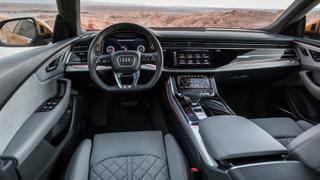 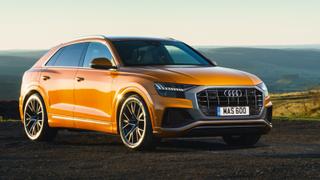 Best of both: The sensible yet sexy Audi Q8

The “8” designation has been reserved for Audi’s top-of-the-range cars since it first appeared on the A8 luxury saloon in 1994. That was followed in 2006 by the arrival of the R8 supercar – and now the number has landed on the tailgate of the latest model in the marque’s Q range of SUVs.

Unexpectedly, the Q8 is not as large as its subordinate sibling, the Q7. It follows rivals such as BMW’s X6 and the Range Rover Velar in being not just an SUV, but a coupé SUV. The idea of applying a coupé design aesthetic to such a vehicle is clearly to make it appear more sporty and less utilitarian. In the case of the Q8, the tactic has worked, both aesthetically and practically – despite those racy looks, this behemoth’s load area will still swallow an impressive 605 litres of luggage with the rear seats folded flat.

Of course, the words “coupé” and “practical” were never really meant to go together, but the more time I spend with the Q8, the more I realise that this is an almost perfect car for the real world. The only available engine option is the 50 TDI, a 286hp diesel that isn’t exactly thrill-inducing but which will take the car to 240km/h and makes it possible to cover 1,000 kilometres between fuel stops.

And, with an interior made soothingly silent by double-glazed windows, a well-muffled engine and the Q8’s excellent aerodynamics, uninterrupted journeys of hundreds of kilometres are not only feasible, but oddly effortless. This really is the type of car that you wouldn’t think twice about jumping into for an impromptu drive from the UK to the south of France.

The journey would pass quickly, too, thanks to the superb sound system and the relaxing ergonomics of the minimalist dashboard that virtually does away with conventional buttons and switches in favour of the latest touch-screen technology. There’s a space in my garage right now, and I’m tempted to say “cue a Q8” to fill it.