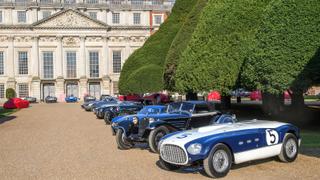 Book it now: Concours of Elegance at Hampton Court Palace

The sixth annual Concours of Elegance car show will return to Hampton Court Palace this summer bringing with it some of the world’s finest classic cars and luxury brands to create one of the UK’s most elegant motoring events.

This year’s Main Concours will feature 60 extremely rare cars carefully selected by a panel of world-renowned motoring experts. Among the highlights will be a 1967 Aston Martin DBSC built by Touring which is the only road-going version of the car in existence, a 1927 Mercedes S-Type Barker Tourer ‘Boat Tail’ which hasn’t been displayed since 1958, a 1912 Rolls-Royce Silver Ghost Taj Mahal and a 1992 Jaguar XJ220 – the marque’s first 200mph car. Unusually, the Main Concours will have no judging panel. Instead being invited is viewed as such an achievement, and each car’s owner seen as having sufficient passion and knowledge, that they themselves will be voting for the group’s most elegant vehicle.

The Main Concours cars will be joined by over a thousand other spectacular vehicles during the event which, alongside being admired by appreciative car fans, will have the chance to win across a number of classes being judged over the weekend. The most prestigious, the Club Trophy, is open to models from Britain’s top car clubs, including Rolls-Royce, Ferrari, Bugatti and Bentley, with the winner awarded a spot in next year’s Main Concours. The Hypercar Concours, meanwhile, rewards speed demons with a prize exclusively for cars with top speeds in excess of 200mph.

Elsewhere the Jaguar Drivers’ Club will be celebrating 70 years of the XK with a gathering of XK120 models while the Aston Martin Owners’ Club will be showcasing an example of every single DB4 variant ever built in celebration of the model’s 60th anniversary. Meanwhile the event’s main stage will host live car demonstrations and motoring experts will bring to life the history and stories behind these beautiful vehicles.

And once you’ve had your fill of cars? There’s a whole host of luxury offerings to keep you entertained. The Concours of Elegance main partner A. Lange & Sohne will be on hand to showcase some of its fine timepieces while tailor Henry Poole and barber Truefitt & Hill will make sure you look dapper all day. Raise a toast with Taittinger’s champagne bar before settling down with a gourmet picnic from Tom’s Kitchen or opt for the Concours of Elegance's hospitality package to enjoy the day in true style.

The Concours of Elegance takes place from August 31 – September 2, 2018 at Hampton Court Palace, visit concoursofelegance.co.uk for more information and click here for tickets.

The new royals: The return of Royal Enfield motorcycles