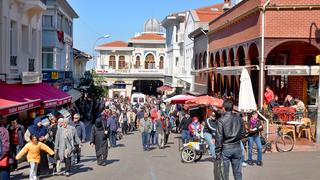 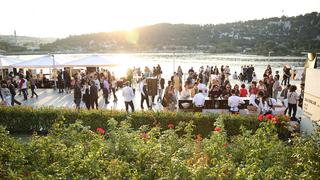 With its stunning coastline, beautiful marinas and its history as a distinguished host of numerous past World Superyacht Awards, Istanbul has long been a hub for superyachts and their owners. This autumn two important art events, the Istanbul Biennial and ArtInternational, will be celebrating this marine connection with two months of sea-inspired exhibitions.

Opening on Saturday 5 September, the 14th installment of the Istanbul Biennial takes the theme of waves and, appropriately, for the first time will extend beyond the city’s museums and galleries to the surrounding islands in the Sea of Marmara.

With the broad title Saltwater: A Theory of Thought Forms, the fair is being curated by art professor and museum director Carolyn Christov-Bakargiev and will encompass 30 locations, including a lighthouse, boat and traditional hammam.

Key nautical works include Ellen Gallagher’s underwater-themed paintings at Istanbul Modern and an underwater stage for marine life on the Bosphorus created by Pierre Huyghe. Visitors should also be sure to take a trip to the island of Büyükada where Adrián Villar Rojas has constructed a 29-piece sculpture park on the shore outside Leon Trotsky’s former residence. Other impressive buildings on the island, including the Rizzo Palace and Hotel Splendid, will house works by Susan Philipsz, Ed Atkins and William Kentridge.

If that wasn’t quite enough marine art for one city, ArtInternational will also be hosting its third edition at the Haliç Congress Center in Istanbul from 4-6 September. Bringing together 87 galleries from 27 countries, all works are priced between €3,000 and €300,000 presenting plenty of scope for new additions to your superyacht gallery.

Along with a programme of events, talks and exhibitions, visitors shouldn’t miss By The Waterside, the fair’s dedicated sculpture terrace overlooking the historic Golden Horn. Ten works by renowned artists including Rada Boukova, Guldo Casaretto and Ichwan Noor have been specially selected for the exhibition and it promises to be a highlight of the weekend.