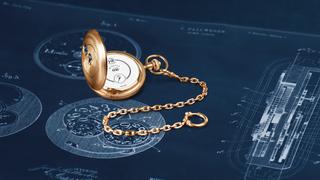 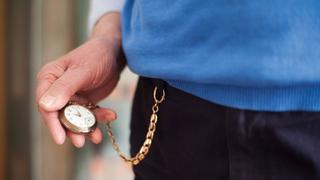 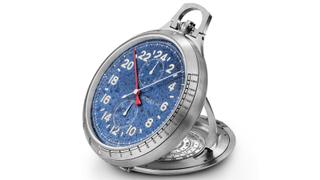 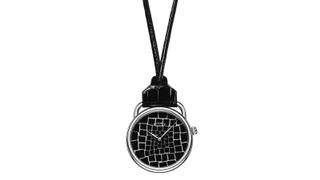 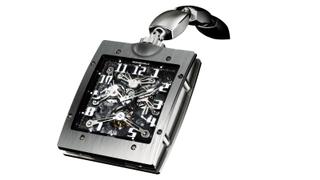 Chances are you no longer wear a watch to tell the time. You use a smartphone for that, right? So we are strapping wristwatches on for another reason – perhaps we love the design, or the fact that the whirring machine speaks of human engineering ingenuity?

This is even more true of the mechanical pocket watch. It not only belongs to a different age, but also requires an ostentatious type of operation (no sneaky glance at the wrist to see how much longer your tedious meeting will last). The pocket watch first appeared in the 16th century and was largely superseded by the more convenient wristwatch after the First World War (so much more practical in combat and, afterwards, in life), but it refuses to go quietly. This may be because even big boys love their toys, and still hanker after running metaphorical train sets (pocket watches survived on the railways long after the general public stopped wearing them). Boat owners might also like the fact that they were used by the Royal Navy.

There is undoubtedly a vintage charm to the style. In recent years, this has dovetailed with the hipster boom of sculpted facial hair and Sherlock Holmes-type three-piece suits and waistcoats. Once you bring back the waistcoat, you bring back the possibility of carrying a watch in your pocket. Just as wristwatches, stripped of their essential time keeping function, are a type of jewellery, a fob attached to a pocket watch makes a substantial decorative statement.

When Gary Oldman portrayed Winston Churchill in 2017’s Darkest Hour, he wore a replica of the wartime prime minister’s famous pocket watch created for the film by Breguet, which made the original for the 7th Duke of Marlborough, Churchill’s grandfather, in 1890. Nicknamed the Turnip, Churchill’s watch was a chronograph with minute repeater and flyback seconds hand, and he was in the habit of attaching small charms to its chain – including a head of Napoleon, a “V for victory” symbol and a gold heart with garnet that Clementine, his wife, gave him on the day of their wedding in 1908. If you like that idea, jeweller Annina Vogel produces all manner of charms and sources old ones, too.

There are essentially two types of pocket watch: open-faced, where the crystal glass is immediately visible so you can see the dial at all times; and the hunter-case style, with a hinged metal cover protecting the crystal, activated by a spring. The name of the latter apparently has something to do with English fox hunters being able to hold the reins of their “hunters” (horses) in one hand while opening their pocket watches with the other.

Several manufacturers, such as Jaquet Droz and Tissot, still make classic-looking mechanical pocket watches but other firms have updated the idea, introducing a contemporary spirit. Last year, four models were unveiled at the SIHH Geneva watch fair that do just that.

IWC celebrated its anniversary with the IWC Tribute to Pallweber Edition “150 Years” pocket watch, limited to 50 pieces. In 1884, the firm created its Pallweber pocket timepieces that had hours and minutes displayed as numerals on rotating discs. These were made until 1890, and the new design is the first pocket watch from the firm this century. Like the original, its digital hours and minutes display is elegant and clean and comes in an 18kt red gold case decorated with a guilloche pattern and matching chain.

Montblanc is also celebrating an anniversary of its own. Its 1858 Pocket Watch Limited Edition (16 pieces in 18kt red gold and 100 in titanium) marks the 160th anniversary of the Minerva watchmaking manufacture, which it acquired in 2006. Hand-crafted and designed for mountain explorers, it can stand on a table, be combined with a built-in compass or strapped to the forearm with a Sfumato aged-calfskin strap. The dial is in obsidian stone.

More radical modernisation is evident at Hermès, where the Arceau Pocket Millefiori, made in a limited edition of just two pieces, features an effect on its dial inspired by La Cristallerie Royale de Saint-Louis, the oldest glass manufacturer in France. The crystal dials look like they have been made from alligator scales, while the caseback and the strap are actual black alligator skin.

Finally, Richard Mille has really pushed its design parameters. Its RM 020 Tourbillon Pocket Watch is a rectangular machine in grade five titanium that has visible mechanics and a function indicator. It shows the winding, neutral and hand-setting positions when the crown is pulled out. There is a zircon endstone for the tourbillon cage and a carbon nanofibre baseplate, and 189 component parts in the crown, crown cover, clasp, stand and the distinctive chain. A real example of back to the future.