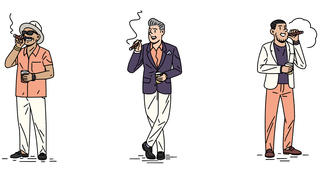 Smoke on the water: How to look after cigars on board

Fine cigars are, surprisingly, like fine wines. Both come from lovingly tended, hand-harvested crops and both tobacco leaves and grapes are fermented, blended, aged and matured.

Fine harvests/vintages are recalled with misty-eyed affection and are hugely sought after, with top cigars prized just as highly as the finest wines. After all, a Davidoff Oro Blanco will set you back £450 a stick these days, the same as a bottle of 1986 Château Léoville-Las Cases.

Once you’ve bought your fancy smokes, you must look after them as you would your vino. A first-rate humidor is key. It should be temperature controlled and – crucially – well padded. Cigars don’t like being bounced around on the briny any more than vintage wine does. Ideally, the humidor will have a tray inside it from which your crew can more easily serve guests their cigars and almost all humidors will boast a hygrometer to gauge the humidity levels within (cigars are best kept at 70 per cent relative humidity).

Eddie Sahakian, of Davidoff in London’s St James’s Street, believes this can be a mixed blessing. All too often folk open their humidor to check the hygrometer is working only to muck up the humidity levels by doing so. A bad case of “cigar anxiety”, says Sahakian.

Prove yourself the perfect host by thinking through every nuance. For example, make sure you have a state-of-the-art jet-flamed lighter as even a light breeze on deck can make firing up a cigar a maddening exercise. And don’t forget to ensure that your ashtrays are deep and covered with a grill. You won’t want sparks and ash flying around with everyone in their summer finest.

And now that cigar lovers are permitted to bring up to 100 Cuban cigars back into the US, there's no reason not to share one with your guests over a perfectly paired tipple. Here are three of the best:

The adventurous: Cohiba is Cuba’s most prestigious brand of cigars and the Cohiba Siglo VI is a medium strength smoke: creamy, spicy, refined and complex with a slight kick on the finish. It is perfectly matched to the aromatic and richly flavoured Havana Club Unión rum, launched in 2015 as the first rum made especially to match Cuban cigars. Cohiba Siglo VI, £45, davidoff.com; Havana Club Unión rum, £235, havana-club.com

The modern: The Davidoff Oro Blanco is the rarest of cigars, released in minuscule quantities. Made from Dominican Republic tobacco aged for a minimum of 12 years, it has exceptional progression as you smoke. Enjoy it with a glass of Delamain Vesper XO Grande Champagne Cognac, full of spice, toffee and vanilla. Davidoff Oro Blanco, £450, davidoff.com; Delamain Vesper XO Grande Champagne Cognac, £130, thewhiskyexchange.com

The best luxury humidors for your superyacht