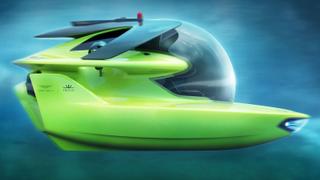 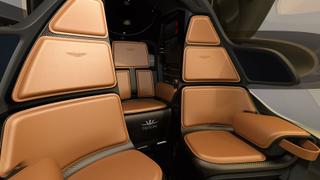 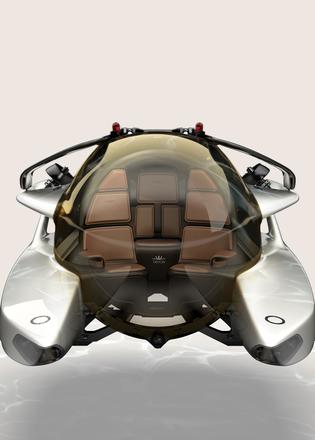 Triton Submarines and Aston Martin have started production on their stylish submersible collaboration, releasing both specs and eye-popping customisation options of Project Neptune earlier this week at The Superyacht Show in Barcelona.

“Last year it was still seen as a bit of a concept,” says Alan Green, Triton’s project manager for Project Neptune. “Now we we’re trying to demonstrate that it’s real. We’ve released the specification that confirms it will go to 500 metres underwater, carry a pilot and two passengers, have a five-knot top speed and will accelerate four times faster than the Triton 3300/3, which is our flagship model.”

Project Neptune, whose concept was unveiled in Autumn last year, has been designed with meticulous attention to styling, including iconic Aston Martin wings both inside and outside. Aiming at the ultra-high net worth market, the sub will also offer an extraordinary degree of customisation.

“This is the lime Vantage,” says Green, gesturing to a lean Aston Martin sports car in an acid green. “If this was your car, for example, we could produce a submersible to match it — the same paint spec, the same cotton for your stitching, the same leather; the acrylic for your canopy can be tinted or have a mirror finish.”

John Ramsay, chief technical officer at Triton Submarines, is amply pleased with aesthetics of the collaboration. “I’m particularly proud of our joint development of the acrylic canopy and iridium coating. The prototypes look incredible, being simultaneously functional and beautiful,” he says.

Project Neptune has also been designed with carefully honed technology, serious attention to safety and reliability, and near 360-degree visibility. As Aston Martin EVP and chief creative officer Marek Reichman puts it: “As with the Aston Martin Valkyrie, the hypercar we are developing with Red Bull Advanced Technologies, we have afforded as much attention to the hydrodynamics of the underside as we have the visible surfaces. Some of that detail may never be seen, but its effect will certainly be felt.”

The first model is due to be unveiled later this year.

The Superyacht Show 2018 opens for business

Deep and meaningful: Taking a test dive in the Triton 3300/3 submarine