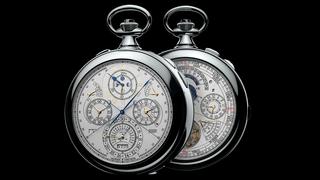 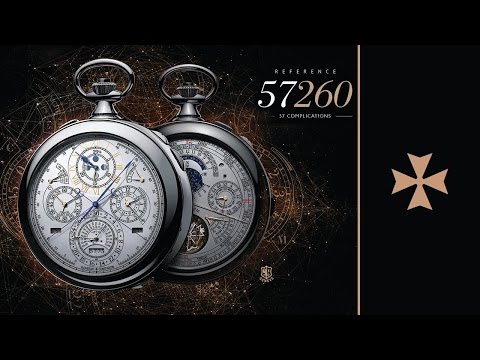 Vacheron Constantin unveils most complicated watch ever made

Fine Swiss watchmaker Vacheron Constantin has unveiled what it claims to be the world’s most complicated watch. Developed over eight years by three of the house’s master watchmakers, the Reference 57260 pocketwatch features no less than 57 complications – several of which are completely new to the world of watchmaking.

In layman’s terms, a complication is any feature that goes beyond displaying hours, minutes and seconds, and Vacheron Cosntantin has packed a number of important new complications into this 98mm, 18karat white gold package.

Firstly, the watch contains no fewer than three perpetual calendars. The standard Gregorian as found in many modern chronographs, an astronomical calendar tracking the Zodiac, the time of sunrise and sunset and the earth’s time in relation to the stars (rather than the sun) and finally a Hebraic calendar.

This is the first time a watchmaker has successful integrated the Gregorian and Hebraic calendars into one timepiece, allowing the Reference 57260 to show the day and month in Hebrew, the date of Yom Kippur, whether the Hebrew year has 12 or 13 months and where in the 19-year Hebrew lunar cycle we are.

Another important innovation is the entirely new chronograph contained within the watch, which promises to make it one of the most super accurate chronometers available. The double retrograde “Rattrapante” chronograph is a split-second system that uniquely uses two retrograde hands, each on their own column wheel, to time precisely to a fifth of a second. A 60-minute counter and 12-hour counter also offer longer timing functions.

The watch also features a stylish ‘Big Ben’ inspired strike, which can be set to chime the hours and quarter hours, be automatically silenced between 10pm and 8am or permanently silenced, as well as offering standard grand and petite sonnerie settings. The Reference 57260 also has an integrated alarm system with its own power reserve and a choice between a traditional alarm chime, single gong and hammer or a five gong and hammer Westminster-style chime.

Although the focus of this timepiece is clearly on the technology, style has certainly not been forgotten. Many of the main functions – including the alarm, winding, striking and calendars – are controlled by buttons discreetly placed around the watch’s case so as not to ruin is sleek lines. The crown has also been moved from the 12 o’clock to 4 o’clock position for added style points.

For serious watch collectors, the sad news is this piece is a one-off created as a special commission for a private client and is not for sale. While Vacheron Constantin have not disclosed the exact price of the Reference 57260 estimates based on the brand’s other Grand Complications put it at somewhere north of $5 million.