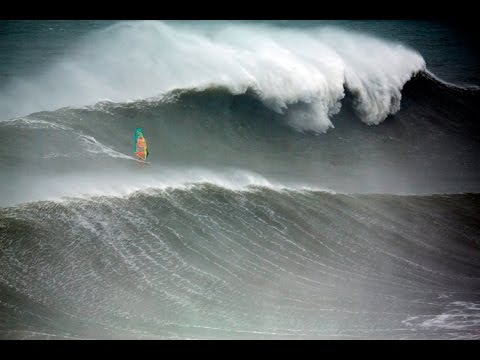 From windsurfing through hurricanes to racing against 1,200 other windsurfers in the sport’s most epic competition, it seems there are few things the windsurfing world has left to achieve. It may come as a surprise, then, that there are still a number of huge waves windsurfers have yet to conquer.

Just last year Alistair McLeod became the first person to windsurf the huge Pedra Blanca wave in Tasmania and now Australian pro-windsurfer Jason Polakow has cemented his place in the history books by becoming the first person to ride the giant waves of Nazaré, Portugal.

Polakow’s entire feat was caught on camera and the sight of the windsurfer successfully taking on the 13 metre waves really is one to behold. It took Polakow an entire year to prepare for the adventure, which proved useful when he faced less-than-perfect conditions on the day. Light starboard tack winds and choppy wave faces made life a little difficult for the windsurfer but, as the video above shows, he appears completely unphased by them.

Polakow, who is a regular face on Maui’s famous Jaws wave circuit, was inspired to tackle Nazaré after watching big-wave surfer Garrett McNamara defeat it in 2011. However, despite spending six hours at sea in freezing February conditions, Polakow says he only caught two or three good waves on the day and relied heavily on the knowledge of local experts to keep him safe.

"I've surfed all the big waves around the world and I must say that for me, Nazaré has been the most difficult and challenging. The waves are coming from many different angles at the same time, making it extremely difficult to judge and be safe," Polakow told press after completing the challenge.

"For the longest time I thought Jaws was the epitome of big wave windsurfing, but Nazaré definitely holds the key to producing the biggest waves in the world. My goal is to come back here on a gigantic swell. We can definitely break that record right out here at Praia do Norte on the next big one."