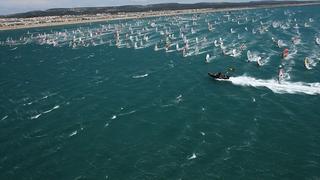 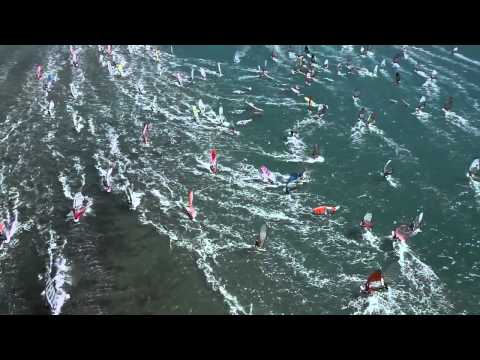 If your tender garage houses windsurfing equipment then you’ll be aware of the fun and freedom this addictive sport can provide. It’s no surprise, then, that many enthusiasts soon begin taking part in windsurfing races, of which there are many all over the world. But none of them are quite like Defi Wind.

Established in 2000, this exciting race has grown to become windsurfing’s biggest event, with more than 1,200 competitors taking part each year. Held in Gruissan on the Southern coast of France, athletes from all over the world come to take part, including star windsurfers Jason Polakow, Bjorn Dunkerbeck and Lena Erdil who all appeared in 2015’s line-up.

As you may expect, with this many athletes and the less-than-stable surface of the ocean, things at the 1 kilometre long starting line can get a bit messy. Unlike normal races, Defi Wind does not begin with a starting gun or flag, instead competitors must wait for a ‘rabbit’ boat to pass them before they can cross the starting line. This combined with howling winds and pushy neighbours creates one of the most challenging starts in windsurf racing.

However, all competitors agree that the starting strategy is to get ahead – and quickly. Fighting your way up from the back means you face the additional obstacles of choppier water and dirty air from other sailors so the idea is to cross the starting line at full speed and preferably in front.

Things don’t become much easier once you’ve passed the starting line though. The course is made up of four gruelling 10 kilometre legs and competitors must battle a famously strong wind that averages around 30 knots but has been known to reach up to 70 knots – inevitably there are more than a few falls.

However, all the participants agree that the tough conditions are worth it for the experience of racing at this magnitude and judging from the images and film clips available, it’s hard to argue. The most recent race was won by French professional windsurfer Pierre Mortefon with his sister, Marion Mortefon, taking the top spot on the women’s podium. However, if you’re interested in taking part yourself, you’ll need to be quick – there may be 1,200 spaces but they fill up very quickly.

Fun in The Sun: The Best Water Toys For Kids