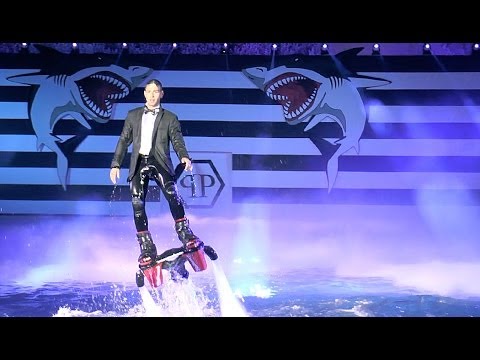 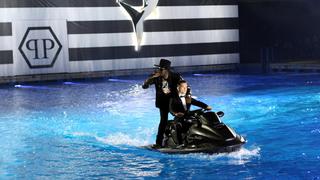 Milan Fashion Week and the Monaco Yacht Show are both well underway this week and – while both are undeniably luxury events - it would be hard to say that the two have a lot in common. Unless, of course, you happen to be Philipp Plein.

When the German fashion designer, who is famous for his sports-punk aesthetic, found inspiration in the ocean’s fearsome sharks for his spring/summer 15 menswear collection, the entire show became a nautical extravaganza of the likes the fashion world had never seen.

Entitled ‘Bite Me’, the collection itself featured nautical themes throughout. Captains uniform-style suits were emblazoned with marine insignia, sharks snapped from vests and Breton tops were in abundance but, as the video above shows, the clothes were largely overshadowed by the catwalk’s dramatic setting.

Staged in a large open air water arena in Milan, the show begins with a group of graceful synchronized swimmers performing what Plein describes as a ‘sensuous water ballet’. However, the serene atmosphere doesn’t last long as American rapper Theophilus London speeds across the water on a jet ski performing his hit Tribe.

As the atmosphere beings to rev up, models parade around the edge of the pool wearing Plein’s latest designs. However, the real entertainment is back on the water where two pro-jet ski riders wearing sharp tuxedos – not unlike Quiksilver's recent tailored wetsuits - perform synchronised tricks and acrobatics while strobe lighting gives the whole event the feel of an avant-garde nightclub.

Of course, synchronised swimmers and high-spec jet skis aren’t quite enough for one fashion show. So, as Plein takes to the ‘catwalk’ for his bow, he is joined by a daredevil pro-flyboarder who wows the crowd with a series of dives, flips and spins. This truly is a spectacle that has to be seen to be believed.

Video: Did you spot this pro-flyboarder on the French Riviera?

Video: Can you do this on your jet ski?