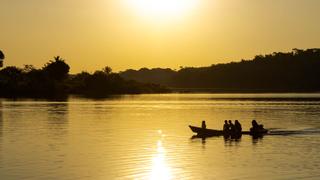 Ocean Talks 2018: Discovering the huge coral reef at the mouth of the Amazon

Professor Gizelle Garcia, researcher at the Federal University of Rio de Janeiro, discussed the scientific importance of a recently discovered coral reef at the mouth of the Amazon and why it’s vital it is protected at Ocean Talks 2018…

In 2016 a vast coral reef was discovered at the mouth of the Amazon River. Initially believed to span approximately 9,500 km², it is now understood that this underwater rainforest covers an area closer to 56,000 km² - roughly the size of Croatia. Teeming with marine life and thought to be home to a myriad of undiscovered species, the reef is currently under threat from oil companies.

“This water in this area is very deep and it was the last place researchers would look for a reef because we have never before found organisms on reef system at a depth of 90-200 metres,” Professor Gizelle Garcia explained. “Overall, reef systems [usually] occur in depths of 20-30 metres.” Prior to the discovery of this reef, it was the general consensus in academic volumes that coral reefs could not form in such areas due to the high amount of sediment and acidity in the water at the mouth of a large river.

Home to some extraordinary sea life, the scientific discoveries have been plentiful. “We have found more than 61 different sponges in the system and hundreds of coral species, including 73 species that have never been seen in that area,” said Garcia. Describing the reef as a “nursery of life”, she showed the Ocean Talks audience photos of bizarre ocean creatures with twisting limbs and colourful scales.

It has been estimated that the area could hold up to 15.6 billion barrels of oil, which means the area is under significant threat from drilling. Campaigners and charities such as Greenpeace are working to protect the reef, especially as a recent expedition revealed that one of the ‘blocks’ where companies intend to drill for oil is in the same area as a section of the reef, which violates environmental impact assessment requirements that drilling must be a significant distance away from any reef system.

Experts have concluded that the biome could hold the secrets to both medical research and a solution for reversing the negative impacts occurring on other coral reefs around the world. “We know that the marine systems in the Amazon reef harbour the biggest biodiversities and diversities that we can explore. That’s why, in addition to the environmental importance of reef system, we should think about the importance of biotechnological resources,” Garcia said.

In pictures: Inside Ocean Talks 2018