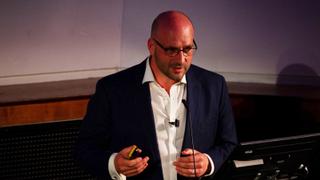 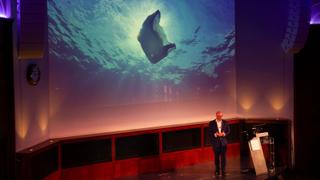 At Ocean Talks 2018 James Honeyborne, executive producer of the iconic BBC series Blue Planet II, took guests behind the scenes of this incredible project and revealed the highlights of the five-year filming process…

When the extraordinary television series Blue Planet II returned to our screens at the end of 2017, the public response to David’s Attenborough’s call to action regarding the state of our oceans was enormous. Prime Minister Theresa May told BBC1’s Andrew Marr, "Nobody who watched Blue Planet will doubt the need for us to do something,” while UK environmental secretary Michael Gove said he was “haunted” by imagery in the final episode, which focused on the human impact on the oceans.

“We didn’t set out with an agenda, we didn’t set out to campaign on plastics,” said Honeyborne at Ocean Talks 2018. “Our goal was to go out and tell it how it is.” After 17 expeditions and 6,000 hours of underwater filming - 1,000 of which were in the deep ocean - the final product reached more than 20 million viewers in 39 countries worldwide.

During his talk, Honeyborne shared the highs and the lows of making the series, from gender fluid fish, capturing the bioluminescent displays of plankton and an octopus donning shells as homemade armour against predators to sharks crashing into the team’s Triton submarine to ward them away from a fallen whale carcass they were devouring. “Turns out these sharks use argy-bargy as communication,” said Honeyborne. “Once they realised we weren’t there to eat their food they were quite happy for us to watch them.”

For Honeyborne, the biggest challenge in creating the series was connecting the audience to this underwater world, which can often seem so alien. The technological progress that has been made in recent years meant that the team was able to get closer than ever to these bizarre creatures and begin to understand what life is like in the oceans. “It’s incredible that still today any of us can go out, put our heads beneath the waves and see something that no-one else has seen before,” Honeyborne said.

Since the series aired the UK has started to wake up to the issue facing the seas. Single-use plastics are being weaned off supermarket shelves, with Iceland promising to ban plastics in all own-brand products by 2023, the BBC committing to ban single-use plastics by 2020 and Theresa May pledging to tackle plastic waste, having recently outlined a plan to ban plastic straws, cotton buds and stirrers.

Looking ahead, Honeyborne spoke earnestly of the value of communication between the superyacht, conservation and media industries for future expeditions and projects. “It’s so important that we find ways of collaborating for the common good,” he said. “We have to be optimistic about what we do because we have the knowledge to turn things around, to improve the situation.”