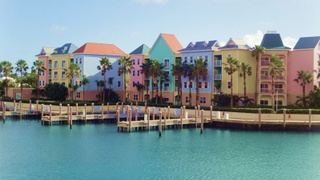 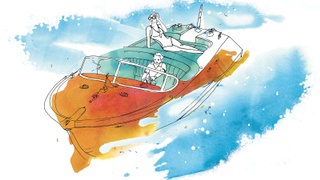 Darling on deck: Kristin Ducote on the trials of towing a tender

There's an art to towing a tender in choppy waters. Kristin Ducote would drink to that... but pirates stole her rosé

It happened in less than five seconds. Twenty miles off the coast of Nassau, we were cruising toward Gilligan’s Island for sunset cocktails. Afternoon sunshine refracted through the patchwork clouds, dropping columns of light on the choppy water around our bow. We lay on the sundeck of our friend’s 28 metre Sunseeker, enjoying the slightly cooler weather of a cloudy June day.

“You sure your captain knows how to tow a centre console?” My husband, Chapman, rose from his chair to look down at the new 8 metre centre console that bumped along behind us. The water was rough, the wave period disorganised, and the centre console dipped and dived precariously through the chop. Now the rest of us stood, lifting sunglasses for a better look. “Hey Cap, maybe you should let out more line on your tow bridle,” Chapman called to the captain, who was manning the flybridge helm about 20ft away. The captain jogged to the railing for a peek at the tender. Each time it skipped over our wake, its bow slipped below the surface and took on a little more water.

“Agreed,” the captain said. Back at the helm, he radioed the first mate to add line while he throttled back. We slowed and began to rock in the swell, as did the smaller boat behind us.“All set,” the first mate radioed. “Take slack! Take slack!” The captain nodded and hit the throttles. But too fast!

The extra length of line wrapped around one of the outboard propellers. In an instant, the shiny new tender spun like a record. We watched in horror as it jerked backwards. It was being towed the wrong way! In less than five seconds, the wake of our acceleration swamped the boat and it capsized. For a moment, everyone froze. Then total pandemonium ensued. Shouting filled the radio waves. With a cry of disbelief, my friend dropped her drink and ice skittered across the deck. Her husband screamed a rather uncreative expletive as he leapt on to a chair, hands in his hair. The captain dropped the boat to neutral and sprinted to the railing just as the tender sank below the waves.

“Mark this spot on the GPS,” Chapman ordered. Without a moment’s hesitation, he stepped over the railing and swan dove off the boat. “Man overboard!” the captain yelled. “What the heck is that guy doing?” All eyes turned to me, and I just shrugged. Who knew what type of MacGyver jerry-rig Chapman was planning to save the day this time? In a surreal blur, we raced down to the swim platform. Chapman finally resurfaced minutes later and out of breath, but with a smile. “Don’t worry,” he called. “I wrangled the anchor out of its locker and set it.”

“Who cares about the anchor?” I asked. “The boat’s sunk!” “We want this baby in the same place tomorrow so we can salvage the hull.” “Forget the hull,” my friend called. “Every bottle of Domaines Ott we had was chilling in its live well for our sunset drinks!”

Next morning, embarking on a rosé rescue mission, we returned to that waypoint with a salvage crew. And the tender was still there! My friend and I did a happy dance, that is, until it surfaced and we got a good look. Unbelievably, someone else had found it first. Every item of fishing and diving gear was gone. We flipped open the live well and alas, it was empty. Talk about shipwrecked treasure! Some pirate was undoubtedly planning quite a party with our pink loot.

Towing a centre console is a tricky business. It’s one thing to grasp the general mechanics, the geometry of bridle angle and line length. It’s quite another to negotiate the infinite variables of rough seas. When it comes to towing a tender, you just never know. So my advice? Keep your coolers empty just in case!

Darling on deck: Kristin Ducote on why you should beware the novice sailor