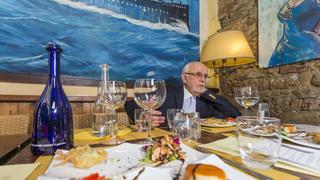 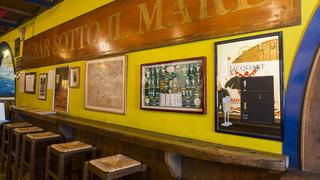 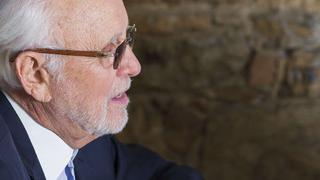 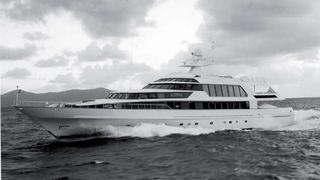 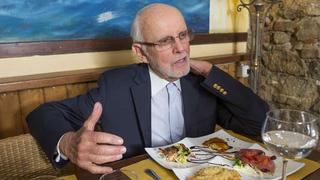 I meet Edward Sacks for lunch at Il Bar Sotto il Mare, just a stone's throw inland from the Benetti yard in Viareggio, on Italy's north eastern coast. Sacks was once both a superyacht owner, and founder and CEO of an innovative 1980s superyacht management company, The Sacks Group. That was a couple of decades ago; since then he's been living by the sea in Malibu, neither yacht owner, nor yacht manager. So it's really very interesting to find him back in Viareggio, the beating heart of Italian superyacht construction.

Sacks was introduced to boats and the sea at a young age. "My dad used to take me fishing on Long Island Sound. I was perhaps six or seven, and the first trip was not much fun." A raised eyebrow and hand indicates how rough that trip was. "My first experience was not a positive one, although I had an opportunity to observe the vastness of the sea." It was inspiring, to say the least, and the start of what became a life-long attraction for everything connected to the water.

"I suppose that is why I have always lived on the water," he adds. "On the Jersey coast, the Florida Keys, in Malibu, the Hamptons. That said, living near the ocean is one thing, but being on the water is a very special discovery, an experience like no other. The oceans, particularly, provide constant theatre - always changing, and occasionally dramatic."

The early fishing trips had captured Sacks's imagination and attention, leading him to purchase a series of small boats, the first of which was about 10 feet (three metres), with a 3.5hp Evinrude  the smallest they made. He graduated from a series of Whalers and Aquasports, eventually buying his first yacht - an eight metre (27-foot) Chris Craft - at a boat show in Asbury Park (New Jersey).

Once Sacks was married and children appeared on the scene, boats became a big part of family life. "We had a home on the Jersey shore and at the Ocean Reef Club in the Florida Keys. I have been blessed with a large family - seven boys and six girls - by merger and acquisition, and the kids would spend the entire day on the water fishing, diving and exploring."

His career required that any further boating interests were put on hold, but Sacks recalls that, "When I was working my day job - chairman of what became a Fortune 500 company in the petrochemicals, fibres and plastics industry - I carried around several brochures of charter boats in my attaché case. They became worn from constant reference. However, I eventually chartered one - Sun Dream - in the Caribbean. The boat was owned by Wayne Huizenga, one of the founders of Blockbuster Video, and owner of the Miami Dolphins. Wayne had hired a superb French chef and an outstanding crew.

"I had a great time, and loved the spontaneity and the flexibility of cruising, and purchased the boat less than a year later. I soon realised the limitations of my starter boat and immediately began planning to build something which would accommodate all of my requirements: comfort, range, similar guest staterooms where everyone felt like a VIP, size and transatlantic capability."

Michael Philpot had done the survey for Sacks on Sun Dream, and it was Philpot to whom he now turned for help with his new project. "Michael helped me quantify my wish list, and started to develop what would become the Project Specification Package, otherwise referred to as the bible. Perhaps his greatest contribution was introducing me to a German architect/designer/stylist called Gerhard Gilgenast."

Sacks is enthusiastic when describing his time with Gilgenast, soon to become recognised as one of the most talented naval architects the industry has ever known. Unfortunately, Gerhard didn't realise how good he was - a German architect with all the discipline that implies, with an Italian soul and spirit.

"Gerhard, in turn, introduced me to Paola Smith, and the build team was assembled. Now we had to decide who was going to build the boat. Gerhard had built F100 for Gianni Agnelli, the automotive legend, at CRN, and felt that Italian yards had been stuck in a vicious cycle not of their own making. He opined that owners went to Italian yards only with their low-budget, tight-schedule projects, but that nobody questions the quality of a Lamborghini, and that the ability and skill of the Italians was always there. All they needed was an owner who would provide an opportunity to demonstrate their capabilities. He was confident that I would prove to be that owner."

CRN would build what became the 47.9 metre Azzurra, launched in 1988 (now Azzurra II). "I was a neophyte when it came to yacht construction," Sacks continues. "While I was very pleased with Azzurra, at that time I had no idea how special a yacht it was until I started receiving calls from the European brokers, who had seen the boat in the Med." In an interview with ShowBoats, Gerhard stated that in his opinion, this is the best boat to come out of Italy since the war, while Smith called Azzurra the yacht he would design for himself - a boat that would absolutely endure the test of time.

Sacks had barely started to enjoy his new yacht, when the story repeated. "Soon I understood the limitations of my new boat; for instance, I wanted a dedicated gym, a home theatre, and several additional features, so Michael, Gerhard and I began to plan Azzurra Due. We returned to CRN - why not? - and, nearing the completion of the 55 metre hull, Michael and I were waiting for Gerhard to join us at the Genoa Show with plans for the superstructure. Gerhard is a no-show with not even a phone call. Al Gore had not yet invented the internet, so I sent a strong letter to Gerhard expressing my disappointment. Imagine how I felt when I learnt that he was gravely ill and would soon pass away."

Sacks now had a completed hull, and no designer. "Now I have to replace Gerhard. I invested six figures on various designs for Due, none of which were to my satisfaction. It had little to do with the limitations of any of the architects or designers, and was more a function of the fact the chemistry wasn't there - it simply wasn't the same without Gerhard. Extremely disappointed, I eventually sold the hull to CRN."

Meanwhile, Sacks had two boats plus an eight metre (27') Whaler especially outfitted for fishing which he kept in the Bahamas for the boys. Sun Dream was in the Caribbean, Azzurra in the Med and, dissatisfied with the few existing yacht management services, he hired two people to look after his expanding fleet, one for human resources and chartering and the other for technical issues. "I receive a call from Charles Evans, a friend and also successful investor and movie producer, and co-owner, with Huey Long Jr, of a legendary sailboat called Ondine." Evans was tied up next to Sun Dream at the Hall of Fame Marina, Fort Lauderdale. Observing the considerable distinction between the condition of his boat and the appearance of the crew, he called Sacks to ask who was responsible for overseeing his boat. Sacks offered to send over his people, who delivered a report to Evans recommending changes in his operation.

"Charles calls me, euphoric, and asks what he owes me. The answer is of course nothing, and I assure Charles that my small staff is available to him any time he would like. He remarks that this is a wonderful service - have you ever considered doing this as a business?. Within the next year, I sell my company and, together with Bob Saxon, start The Sacks Group. We were shortly providing management services, project supervision and charter marketing for over 60 boats, the first one of which - no surprise - was Ondine." And so, with the birth of TSG, Sacks stepped across the divide from owner to industry.

The company quickly became one of the most innovative and influential yacht management operations in the industry. "My perspective was that of the owner and, convinced that yachting was the best-kept secret in the upscale leisure travel industry, I hired several girls to do nothing other than promote chartering to corporate travel departments. In addition, they would read the Wall Street Journal and other business publications, and send information on chartering to those who were certainly qualified to charter or purchase but had never considered doing so."

Sacks ended his involvement after he moved to Malibu, and tired of the commute to Florida to run the business. "I called in the managers of the three divisions, told them I was selling them their respective units for one dollar, would discharge all current obligations (largely media commitments) and essentially handed them the company debt-free. And that was that." Not long afterwards, Sacks also sold both yachts and the Whaler. "There's nowhere to use a boat in California - how many times can you go to Catalina?" he asks wryly.

Since then, more than 20 years have passed, and here is Sacks back in superyacht country. "I would still like to build Azzurra Due, perhaps a 60 metre," he says. Sacks points out how boats have grown. "When delivered in 1988, Azzurra _was the 37th-largest boat in the world, and the 17th-largest in the US. Someone told me last year that when they saw the list of the top boats _Azzurra was 632nd - in 25 years. I find that interesting, since I recall when 30.5 metres (100 feet) was considered a megayacht."

He has spent considerable time in Italy over the past year, during which time he has represented International Shipyards Ancona (ISA) and, through his efforts with the brokerage community in the US, has considerably expanded their presence and visibility in one of the world's largest markets.

Citing good chemistry with Baglietto's owner, Beniamino Gavio, he is considering doing the same for this legendary shipyard. And all the while Sacks will be looking to return to ownership himself - plus ça change, straddling the owner/industry divide, just like the old days.

On board Andrea Bocelli's yacht Libertas