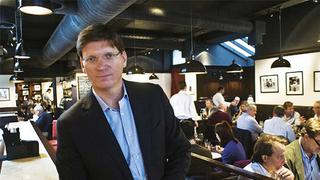 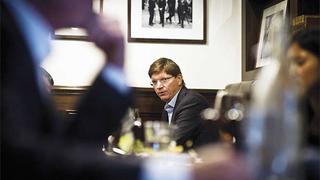 Niklas Zennström is one of the founders of Skype, which has become to instant messaging and voice-over-internet-protocol (VoIP) what Google is to search. He is also unfailingly polite. In a burst of over-efficiency, the maître d at Goodmans Mayfair steakhouse crosses the Zennström booking off the list when I turn up early. So when my lunch guest asks for his table five minutes later, there is no record of one. Oops.

Fortunately, Niklas Zennström is no prima donna and waited patiently while it was sorted out, a rueful half-smile as he finally beat his way through the confusion. Atomico, the technology venture capital firm that Zennström founded and now serves as chief executive, has its London offices just around the corner in New Bond Street.

Zennström had taken time out from his work day and came dressed accordingly. He ordered just as sensibly, steak frites; cooked medium but with salad instead of the chips. I started to get the sense of a very measured, rational man.

Zennström has made nearly as big an impact in the rarefied world of maxi yacht racing over the last five years, as he has in technology in the last decade. He appeared on the international sailing scene in 2007, quickly moving onto a Mini Maxi and then the TP52, the current peak of inshore monohull racing. The regatta wins have flowed in his wake, and all in the space of a few short years. But Zennström is no Johnny-come-lately to sailing.

The clues are there: Zennström supports the British Keelboat Academy through the loan of the Farr 45 Kólga, and by providing time for the senior members of his crew to mentor the next generation. His charitable foundation, Zennström Philanthropies, is working to restore the condition of the Baltic Sea as part of its environmental agenda. These seem like the actions of someone with a deep connection to the oceans.

Im from Stockholm and thats where I started to sail when I was seven years old, he says. My family had a cruising sailing boat and we spent a lot of time during the summers just cruising around Stockholm, Finland and Denmark.

Both my parents were teachers so they had a long summer break, so for a few years we were out cruising maybe one month or almost two months.

Zennström remembers a 7.5m boat, a 1970s production cruiser derived from a racing design (an IOR half tonner), complete with overlapping headsails.

My father was the one that liked sailing, and he put it to my mother that we should get a sailing boat, he says, describing how he would trim and race the boat against whatever was nearby. Unfortunately for the young Niklas and his father, his sister was more likely to have her nose in a book.

Eventually, the declining interest of the distaff side of the family meant that the boat was sold and the long holidays were devoted to a summer home. But Zennström was already sailing the Optimist, and now he started racing from Uppsala  the birthplace of the Olympic Finn dinghy.

Big for his age, Zennström had to move up to the Europe when he was 13, well before the normal Optimist age limit. A similar move followed from the Europe into the Laser. It meant he was constantly competing against older children and, combined with his sisters unwillingness to be dragged around by the family so Niklas could compete, it meant he never got to race in big championships.