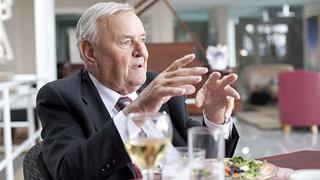 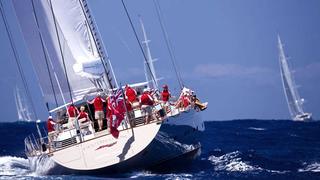 Ron Joyces grand home on the shore of Lake Ontario is a very long way from his humble origins in Nova Scotia  but a passionate appreciation of the country in which he made his fortune runs as a constant narrative through the different chapters of his life.

Twenty years ago, when Joyce built his home, he was able to make it an embodiment of that passion. It is filled with a mix of art and hunting, shooting and fishing trophies, each floor themed for one of Canadas provinces: Upstairs, French Canada  Quebec, he explains over a fabulous lunch of shrimp made by his chef and housekeeper of almost 30 years, Vi. The swimming pool is Atlantic Canada. Downstairs is Western Canada. My room is the Arctic. And out through the picture windows are the boat dock and the lake.

If he was American, Joyce would be a living embodiment of the American Dream  but Canadian icon is equally as fine. He built the chain of Tim Hortons doughnut and coffee shops from a ground-floor investment in a single franchise, and the restaurants are now threaded through Canada and Canadian life like a hybrid of Starbucks and Dunkin Donuts.

Its all part of the learning curve of life Joyce says. I had grade nine education (to age 15). I had no high school, there was no university training. The one thing I had was a work ethic. Ive been very fortunate really. That work ethic probably came from his mother: Raised three kids on a widows allowance. She worked very hard, he says.

Joyce was born in 1930, right into the teeth of the Great Depression. My mother was nine months pregnant with my sister when my father, her husband, was killed in a motor vehicle accident, he explains. Joyce was three years old. His widowed mother retreated to her familys home in Tatamagouche, Nova Scotia, bought a tiny house with the life insurance and struggled on without running water, plumbing or electricity.

According to his autobiography, Always Fresh: The Untold Story of Tim Hortons by the Man Who Created an Empire, Joyce was self-conscious about the familys poverty when he was young, but despite the tough circumstances, it sounds like a good place to grow up. He spent his free time at the wharf, fishing and swimming in the summer. When we were kids we used to steal the fishermens row boats, but we always put them back, he recalls.

He decided early that he would leave school for the world of work. But at the end of WWII, with servicemen flooding home, it wasnt easy to find a job. After a year of struggling in Tatamagouche, Joyce joined the many Canadians seeking their fortune in Ontario. He picked Hamilton, having heard that it was the centre of Canadian industry.

I saved up $35 and it cost me $30 for the train fare. That left me $5. We took up a collection to buy beer and sandwiches. Got to Hamilton and I didnt have a nickel. He was taken in by a lodging house and given three days to find a job; it took Joyce just two days to find a spot at the American Can Company. Other jobs followed in tobacco fields, and at the Firestone Tire and Rubber Company, with Joyce working double shifts and weekends to bring the money in.

He was married at 19, and 21 when the sea properly entered his life. In 1951 I joined the navy with a view to going to Korea. I had tried to join the police before I went to the navy and was turned down. That was the only reason I joined the navy, he says. On leaving the navy, he achieved his original ambition and joined Hamiltons police force, staying in for nine years. During the latter part of that period, he started up in business. I enjoyed being [in the police force]. I enjoyed the work, but the problem was terrible salaries, youre making very little money. I was married with four children, so had to work a whole lot of part-time jobs. Then I ran into an old navy buddy; the guy owned a Dairy Queen  an ice cream franchise  he said get yourself one of these, so I started up my first business with the Dairy Queen.