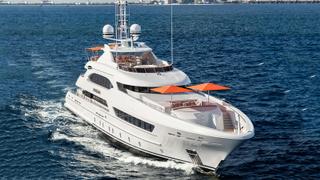 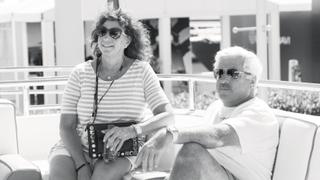 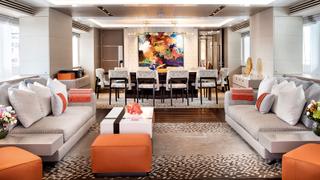 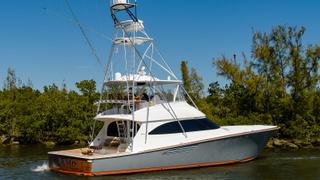 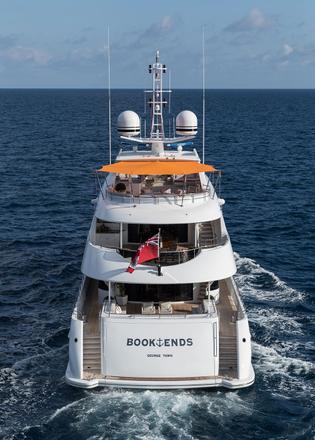 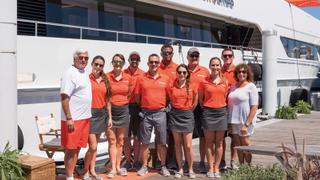 Having gone two years without a yacht, superyacht owners Bob and Amy Book are making up for lost time. They have crossed the Atlantic to explore the Med – and meet new friends along the way, as they explain to Risa Merl...

“Yachting defies common sense. It's really irrational when you think about it; a deep-rooted love,” says Bob Book, owner of 47 metre HeesenBook Ends, his 17th yacht of that name.

It was in the middle of their honeymoon more than 40 years ago in Acapulco, Mexico, that Book and his wife Amy discovered their passion for boating. The newly-weds went out on a little five metre boat along the coast, and Book was instantly smitten. “I went back every day until I got sun poisoning. I’m on my honeymoon in this very romantic place, and I couldn’t do anything! Good introduction to boating, right?” Book says with a laugh. Back home in New York, Book wasted no time and bought his first boat.

“It was a 25ft single screw. It had a mustard hull and yellow seats. Amy named it Book Ends, which has stuck all these years,” says Book. “I was the captain and she was my first mate. And we had no idea what we were doing.

”Since that time, the Books have become seasoned sailors, owning ever-larger Book Ends, including a Westport 112 and a 40 metre before their new Heesen. The maiden voyage of the first little yellow Book Ends was a short mosey down the Hudson River and around the Statue of Liberty. For second-generation Americans, whose grandparents arrived at Ellis Island as immigrants escaping troubles in Europe, seeing Lady Liberty from this perspective brought tears to Bob and Amy’s eyes. “Our grandparents arrived in steerage, and here we were in our own boat, living the American Dream,” says Book.

Truth be told, Bob Book is the American Dream incarnate. Born the son of a rabbi and raised on New York’s Lower East Side, Book’s idea of boating as a child was riding the Staten Island Ferry, which cost five cents. But a little ingenuity propelled him from immigrant’s son to serial entrepreneur before he even graduated from college.

“My first business was an accident,” Book says. He was attending NYU in 1970 and discovered there were 21 colleges and universities within the five boroughs of New York City and all were suffering from student housing shortages. The city was also at the height of its financial crisis and hotels were “in the doghouse”, as Book puts it, reporting less than 50 per cent occupancy. He saw an opportunity, and at only 19 he started his first business, a student housing company that worked with hotels to rent unused rooms to students. This expanded to offer rooms to young professionals as well, with its reach soon growing across the country and the world.

Book’s next business was a natural evolution. “I had thousands of students in lots of different hotels, and half of them couldn’t pay the rent each month,” he says. “So I started a temp service to find them jobs.” One of the students who was constantly broke was particularly good at making sandwiches, so Book came up with an angle. “Around 11 o’clock every night, I’d send him to all the rooms in hotels – just about the time when the kids would start getting the munchies because they were smoking grass – and he’d sell out his sandwiches every night!”

By the time Book graduated, the temp service was going strong, so he and a business partner started an employment agency. This was just the beginning of a long list of successful businesses that he has helmed over the years. A decade ago, he acquired what’s currently his biggest company, Jet Support Services, Inc (JSSI), the world’s top independent provider of aircraft maintenance programmes. Book is the chairman and one of his two sons, Neil, serves as CEO. JSSI has headquarters in Europe, Asia and Chicago, where Neil keeps his own boat on Lake Michigan.

“That’s his third boat in three years, so he’s following in my footsteps,” Book says, beaming with pride. “The first two boats were Sea Rays. Next year I think he’ll move into a 22.8 metre Viking; and my grandson Sidney, who’s six, loves it!”

Being able to pass down the love of yachting to their children and grandchildren is part of the joy of yacht ownership for the Books. “Yachting is also a great way to keep your family together,” says Amy. “You know, ‘if you build it, they will come’? Well, if you have a boat, your family comes and spends time with you! It’s the best.”

Spending time on board with family and friends – and meeting new friends along the way – is a big part of the attraction for the Books. Every summer for seven years, they would rendezvous with their good friends, the owners of the 61 metre HakvoortJust J’s. Before the summer of 2017, Book received a call from the owner of Just J’s saying he was planning to move the boat from Newport to the Med for the summer. “He asked me, ‘are you sure you’re going to have a boat by this summer?’” Book recalls.

The Books had found themselves in a rather unusual place – without a superyacht. Their previous Book Ends, a 40 metre Westport, had sold surprisingly swiftly, and they were in the middle of a two-year shopping trip to find the perfect yacht, one that would have the range and space they desired to go further afield than their usual cruising grounds of the Eastern Seaboard and Bahamas.

“I was in every shipyard in Europe for two years and spent almost $2 million shopping for a boat,” Book says, explaining he had marine surveyor Ian Kerr check out any boat he was serious about. “If you do it right, that’s a couple hundred thousand bucks. I would frankly never buy or build a boat without Ian overseeing it.”

When the owner of Just J’s called again to ask if he’d have a boat in time, Book responded positively, thinking he was about to close a deal. “But that deal blew up over lunch, and that’s when Thom Conboy [of Heesen Yachts] called me,” says Book. “I had just stepped out of the lunch and Thom said, ‘what’s it going to take to get you in this 47 metre?’” Book had been to Heesen on his yacht shopping tour, but because they were originally after a 55 metre, the 47 metre in build at the Dutch yard hadn’t caught their attention. “It was like divine intervention – we agreed on a price and 48 hours later I was in the shed.” In less than a month, they took delivery, just in time to join Just J’s in the Med.

The new Book Ends ticked a lot of the boxes – steel hull, long range, good storage – but it didn’t exactly match their preferred interior style. The Books like to have a simple base to personalise, and since taking delivery they’ve worked to tone down some aspects of the original design, adding simpler joinery, more white carpets and removing superfluous furnishings, all the while adding their signature bright orange hue and bold artwork, much collected on their travels.

In Portofino they bought pieces from a local artist, who they invited over for breakfast the next day. “He said no one had ever invited him on board before,” Book says. “And now I’m trying to arrange an exhibition for him in the States.”

Meeting new people, whether it’s the couple on the yacht next door in La Spezia or locals in the Med or Bahamas, is what keeps the Books interested. They prefer this over “seeing and being seen”. “Our favourite places might be places that not everyone likes,” says Amy. “Capri is beautiful, but it was not what we wanted. Because we were there in the summer, it was like Times Square on New Year’s Eve. We like places where we can walk around, where we can really talk to people. We’ve made so many friends because of the boat.”

During their six weeks in the Med, the Books particularly fell for Italy, and among their favourite spots were Elba and Forte dei Marmi. The latter is the home of their good friend Andrea Bocelli, who helped the couple find a new captain, and one of their favourite restaurants, Santa Monica, is nearby in Viareggio.

Though the Books value the friendships they’ve made, the yachting life is also filled with a healthy dose of competition. They own a Viking 62 sportfisher and are about to take delivery of a Viking 72. The Vikings, named Book Ends Team Hookers, are put to work in fishing tournaments along the US East Coast and in the Bahamas. Book says fishing itself is boring – it’s the tournament atmosphere and meeting people from all walks of life that he enjoys. “I love the competition,” he says. “I have a great team whoall want to win. There’s an old expression, ‘show me a good loser and I’ll show you a loser’. So the fishing is always competitive, and it’s a lot of fun.” Book heads to Bahamas-based tournaments with a fleet – Book Ends serving as the mothership while the Viking and his Scout 42 head out to the fishing grounds.

Bob and Amy plan to spend even more time on board this summer. Book relishes the fact that he can work from his on board office. “Nobody knows where I am! We could have a board meeting and they just assume I’m in the office – no one knows I’m really in Italy.”

It’s not all been unalloyed good times, but the Books are experienced enough to know that peaks always follow troughs. “So many times I’ve said I’m getting out, it’s just not worth it; it’s so much stress, it’s so expensive and so many things can go wrong – and they usually do in boating,” Book says. “But then you have a summer like we had, six weeks cruising all over the Med and discovering places. You know if you leave it, you wouldn’t be sitting here, you’d be sitting on a couch somewhere watching a football game.”

Amy adds: “And we would never have gone to some of these places without the boat. Even if people do go by land, there’s no comparison to seeing these places from the water and having your home with you.”

On board with Lang Walker, owner of the Kokomo yacht series

On board with Carl Allen, serial yacht owner and CEO of Allen Exploration