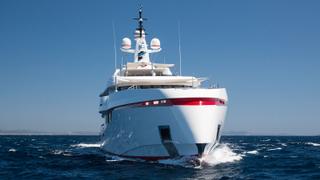 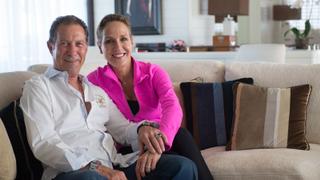 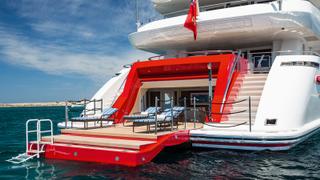 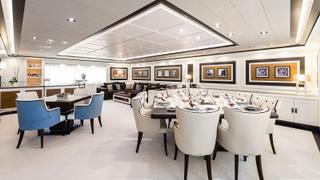 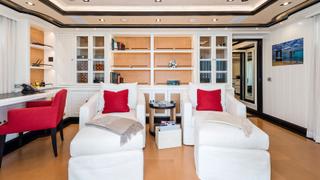 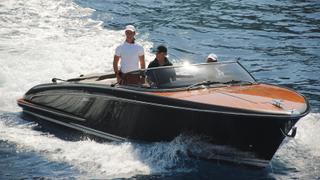 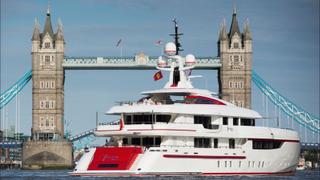 On board with Bruce Grossman, owner of 55m yacht Forever One

Having graduated through a series of ever larger Mangustas, the Mexican soft drinks scion tells Caroline White how he finally found a boat big enough to call home – with five bars and a room just for shoes...

Bruce Grossman’s life on the water started with a bang. “It was an old Chris-Craft in Tampico,” he says, pointing to a monochrome image of a classic speedboat, a blurry figure at the helm, framed on the saloon wall of his 54.7 metre ISA yachtForever One. “That belonged to my grandfather. One of the first Chris-Crafts in the world – all wood. In those days you had to open up the exhaust vents before you started the engines. The captain got drunk one night and forgot to open them up, so the boat blew up. That was a heartbreaker. My grandfather never bought another boat.”

But it was only the start of the younger Grossman’s love affair with the sea. The family is, as he puts it, “in the Coca-Cola business”, one his Texas-born father Burton started in 1964. Burton died in 1999, leaving Bruce and his sister on the board of one of Mexico’s most successful businesses. Grupo Continental today consists of 46 soft drink related corporations across Mexico – they do everything from sugar refining to plastics and bottling. The siblings are often listed among Mexico’s wealthiest billionaires.

But if you met Grossman (off his superyacht) you probably wouldn’t guess it. His manner is gentle and relaxed, he jokes warmly, listens patiently and responds thoughtfully. There’s no bullet-proof bravado – just a penchant for pushing tequila on guests mid-afternoon. “Try the Dragones,” he and his wife Elsa decide after a brief conference in Spanish. And they warn sincerely about the dangers of consuming tequila irresponsibly, disappointed by the reputation their national drink has acquired in American student bars. This is not billionaire behaviour – but then Grossman’s role in the business has not required fangs and talons.

“We had a rule in the family that at age 65 we made room for the next generation, and I did, I stuck to that,” says Grossman, who after university worked at Procter & Gamble and started his own business, before returning to the fold. “I stayed on the board a couple of years, but we’ve got professional people running the business and have for almost four generations. So we all have to do our own thing and find our own pursuit of happiness.”

For him, that happiness has always been found at sea. “We lived on the water (when I was a child) in Tampico, Mexico – the Gulf Coast. We all had little outboard motor boats that we used to go out and ski with and stuff, but never a proper boat. They were little skiffs.”

It was here, as a child, that Bruce met his little sister’s best friend, Elsa. “I hated both of them,” says Grossman. Elsa confirms that the feeling was mutual. Relations thawed as they grew older and their families remained close, but Elsa’s parents moved to Spain and the pair made their own lives. “When we were grown-ups I started realising that this was quite the woman,” recalls Bruce. “I chased her for a long time. When she said no... I wasn’t used to having no in my life. I had a very privileged life and childhood.” Eventually, however, she relented, and the couple’s grown-up children are now one family. The yacht Forever One is named for Elsa, Grossman’s forever one. “I made some serious Brownie points on that,” he says quietly.

But it took Grossman some time to get that first “proper” boat he’d always wanted – a Mangusta 72 in 1991. “It had two bathrooms, a little bitty closet, one guest cabin – the other one we gave to the captain, he lived on board – and our chef almost had to sleep standing up. We lived on the boat four months out of the year,” he says. “We’d come over (from Mexico) in the summertime, get on our little bucket and blow around. We couldn’t go very far, so we’d go up and down the Med – Portofino, Saint-Tropez and across to Sardinia. That was it.”

Grossman moved up in the Mangustas, in the process becoming good friends with the Balducci family, which owns Mangusta builder Overmarine. “In those days – the late ’80s, early ’90s – they traded you up,” says Grossman, of the days when young Wall Street types were snapping up fast boats at breakneck speed. “Mangustas were in such high demand – so, we used that (22 metre) 72 for two or three years and then they made us an offer. We got the same money we paid and moved up to a (28 metre) 92. And right in the middle of the 92 build – it was almost finished – some guy came along and offered us a million more than we paid for it. So we said OK and traded up to a [31 metre] 105.”

They did take delivery of that boat, but soon moved up to a 40 metre 130 – a one-off Grossman designed with the help of the Balducci family. “We used it for about five years – we would go further, up to Turkey and Greece, watching the weather a lot because it didn’t have stabilisers. When we had a window we’d blow. We would be going pretty fast.” The next and most significant boat signalled a change of gear. “We were getting a little bit old and didn’t want to go fast anymore, we wanted something more comfortable,” he says.

It took the Grossmans a while to work out exactly what that comfort should consist of, trawling boat shows until they were sure that their dream yacht didn’t already exist. And starting from scratch wasn’t simple – Overmarine didn’t build Mangustas to match the scale of this new project. The vision started to come together when Fernando Nicholson of Camper & Nicholsons International introduced the Grossmans to the Argentinian naval architect Horacio Bozzo – his lines were original, including a plumb bow that at the time was unusual. “When we saw it, we said, ‘that’s different’. And different was what we wanted,” says Grossman.

Just like his first 22 metre Mangusta, Grossman would treat this 54 metre superyacht as a home, and he needed a design that took that into account. “My wife and I used this as if it were a mega apartment that we can move,” he says. “When you’re blowing $20 million on an apartment in New York, if you don’t like your neighbours or you don’t like the view, you’re stuck in cement land. This one, if we don’t like our neighbours or don’t like the view, we turn it around or we go.”

The designer visited the Grossmans’ homes in Madrid, Northern Spain, Texas, Monterrey and Tampico to see how they lived: “We showed him how we like to move around, how we dress, how we entertain, how we like to treat the staff.”

The result is plenty of areas where guests could “really be alone if they wanted to”. “There’s a rule on this boat that if somebody is reading a book you’re supposed to leave them alone. They come here to relax and enjoy themselves,” he says. But conversely there are also plenty of social spaces. “The way Mexicans live is bars. We have five bars on this boat,” he says.

And plenty of other unusual features on board reflect the Grossmans’ passions and habits, from the room in the upper deck suite dedicated to Bruce’s shoe collection, to the cosy lounge situated forward on the main deck, where you might expect the master or VIP suite to be, to the Riva Iseo, Bruce’s beloved toy used on special occasions, which sits alongside the day-to-day Novurania tender in the garage. The couple were just as involved in personalising Alessandro Massari’s interior décor, from choosing a depth of sofas that would be comfortable for women wearing skirts – “We sat on these cushions 50 times, we’d jump up and down on them” – to a ban on leather because it’s “slippery”, to ample space to store books and hang pictures, which make the boat feel like what it is – home.

The most overt expression of the Grossmans’ on-water ethos is written down, in a list of rules entitled The Forever One Way and handed to each crew member on employment. The general themes are teamwork and kindness, and the word “respect” is used four times, in relation to how the owners feel towards the crew as well as how the crew should feel towards the owners. “We help them out with their estate planning, salary compensation is pretty good and we have full rotation for most of the crew. They get to relax and go home. We treat them like a family,” says Bruce.

With a cruising schedule like the Grossmans’, that’s certainly a good thing. They know the Med’s hotspots inside out, and the rotation of holiday snaps on the saloon cinema screen runs through thunder in Capri and rainbows in Porto Cervo, but Greece is the favourite. “Sometimes we tie up for days on the rocks,” says Bruce. “This year we did the Sporades in the north-east, the first time for us. Amazing.”

Two years ago they ventured up the Kiel Canal into Denmark, Sweden and Norway for the fjords. They loved it so much they’re planning a return visit this year – and this yacht, with its indoor nooks as well as al fresco lounges and bars, seems the perfect vehicle to do it in, come rain or shine (or blizzard). Hopefully, though, they’ll be sitting in the sun at one of their bars, sipping Dragones and admiring the view that they can change any time they like.

On board with Jack and Mary McClurg, owners of 43m yacht Marcato

Luxury yacht charter in the Mediterranean