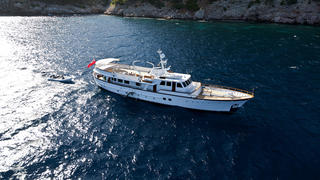 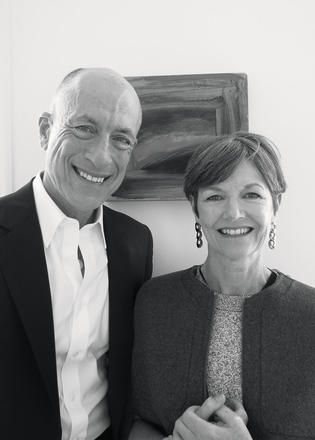 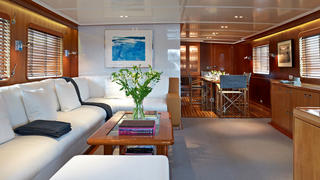 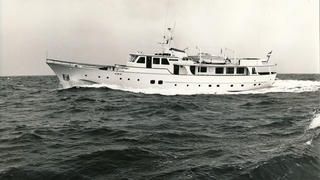 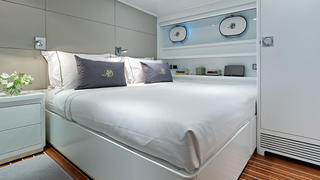 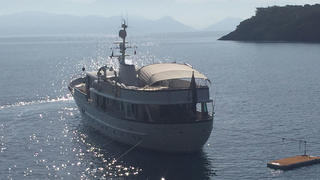 Refitting their classic 1972 FeadshipHeavenly Daze was a labour of love for Elizabeth Brooks and her husband Rory – as, in turn, was launching the Feadship Heritage Fleet. Caroline White reports...

Your charter yacht's engine breaking down is an unlikely inspiration for deciding to buy your own boat. It is a nerve-racking investment at the best of times, and first-hand evidence of what could go wrong is usually taken as a cautionary tale. But for Elizabeth and Rory Brooks disaster was the precursor to love.

“We were in the South of France chartering a motor yacht, and it broke down,” says Elizabeth. “And so we were stuck in the marina at Port Cogolin. There was this boat moored next to us, which was a very pretty classic yacht, and my husband persuaded the captain to talk to their captain and we had a look around.” The yacht that caught their attention was Heavenly Daze, a 32 metre 1972 Feadship. And they knew then that they wanted their own boat.

They looked around for a classic yacht, but eventually they returned to Heavenly Daze and, in 2002, made an offer. “The first thing you fall in love with is very often the right thing,” says Elizabeth. The yacht is now a successful charter with Y.CO and a beloved family boat.

Elizabeth and Rory grew up around London and spent the first nine years of their marriage in the US, where Rory worked in banking, first in Boston, then in New York. Elizabeth worked in public relations, advertising and then fashion magazine publishing, before the pair returned to London and Rory co-founded the private equity group MML Capital Partners, enjoying phenomenal success. The Brooks World Poverty Institute and the Brooks Foundation, which supports poverty research, UK higher education, social justice and contemporary art followed. Art is Elizabeth’s special interest, having chaired the patrons’ committee of the Tate, and their Holland Park home is adorned with stunning contemporary pieces.

They also picked up a charter habit. The pair are not lifelong yachties, taking to the seas about 30 years ago to explore the Med on sailing yachts. “We had a couple of years where we were lucky enough to charter a beautiful boat – Juliet – a Huisman-built boat,” Elizabeth says. “We had a holiday in the British Virgin Islands on her and then the following year in the Grenadines. It’s the freedom to go where you want... to be completely private, to be in touch with nature, enjoying just being on the water. Exploring, not being confined to one destination that you’d keep returning to, if you had a villa. It’s all of those things.”

Boat ownership certainly gave them that freedom. They chose a motor yacht because they wanted decent accommodation and they were not dyed-in-the wool sailors. They spent several years cruising with family and friends until, in 2011, it was time for a refit.

They engaged the Amsterdam-based designers Wetzels Brown and the project took place at the Pendennis yard in Cornwall, UK. They removed twin cabins amidships – redesigned as flexible cabins with sliding twins that can become doubles – and renewed plating on the hull and tanktops. In terms of style, “we had this consideration about what was designed in 1972 in terms of furnishings and accessories”.

So, while the light fabrics and simple décor are contemporary, there are nods to the yacht’s heritage in curving mid-century chairs, for example. And heritage was about to become a major element of their boat ownership.

“While we were having her refitted, we thought, well, this might be an opportunity to look into the history of the boat,” says Elizabeth, and they visited Feadship’s offices in Amsterdam. “They took us into their archive, which is full of these brown manila files with ribbons. We were shown the file on Heavenly Daze – I think the final invoice for the yacht was on one page. Things were much simpler back then.”

The couple loved diving into the history – the original launch pictures and commission; layers of character for a yacht whose personality was her chief charm. Out of this process, and similar projects with other owners, the Feadship Heritage Fleet was born. Rory is vice-chair of the fleet, a group of classic Feadship owners who meet with their boats regularly at events such as the Monaco Historic Grand Prix, the tall ships event in Amsterdam and the annual rendezvous, hosted by Feadship at one of its yards. “At the inaugural meeting in Aalsmeer, Henk de Vries was sitting there in this small sailing yacht, with his wife and friends, and behind him there was the huge Feadship shed with a huge new motor yacht sitting inside it,” says Rory. “You could trace the line of history from his grandfather’s wooden sailing boat, all the way to the present day.”

There was also a pretty 15.5 metre 1956 classic called Quicksilver at the meeting that “we rather irrationally fell in love with”, says Elizabeth. They bought her and renamed her Hera. This was, as Elizabeth puts it, “a completely different proposition to Heavenly Daze. She’s not going to go on the high seas”.

With advice from project manager Kees de Keizer, they had her refitted at a small, family-run yard in Vinkeveen and returned to Wetzels Brown for interior design. They wanted to keep the classic style but update tech and elements such as the original toilets and basins, which were less than charming to modern tastes. Accommodation was improved and a “proper” galley installed. The new décor is similar to Heavenly Daze’s but with some bolder pops of turquoise and burnt orange. “We were looking at that northern European sensibility, what works with that cool northern light,” says Elizabeth.

Hera, relaunched in May, stays in the I-Dock marina in Amsterdam city centre – “it’s been the most fantastic portal to explore the waterways going in and out of Amsterdam” – while Heavenly Daze is kept in Mallorca, a base for glorious summer cruising. “Our favourite destination in the Mediterranean has always been the Aeolian Islands, but this summer we went through the Aegean,” says Elizabeth. “We started in Athens, in Patras, and went to Spetses, Sifnos, Serifos, Hydra, Milos, Santorini and Mykonos and we ended up in southern Turkey. And that was absolutely extraordinary. The water is beautiful, it seems to be a slightly different shade of blue to the rest of the Mediterranean, pure and gorgeous.”

She lists the untouched beaches, variety of topographies and atmospheres, history, the blend of simple island living and sophisticated spots – but most of all it is the ability, with a boat, “to be moored in the middle of nowhere” that made the destination for the Brookses.

On board with celebrity sailing yacht owner Pete Townshend