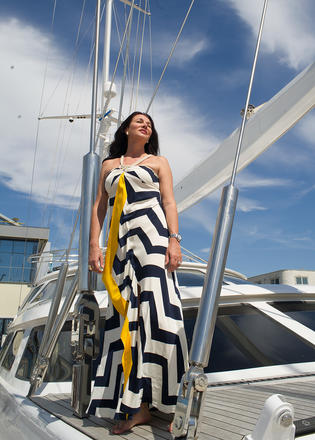 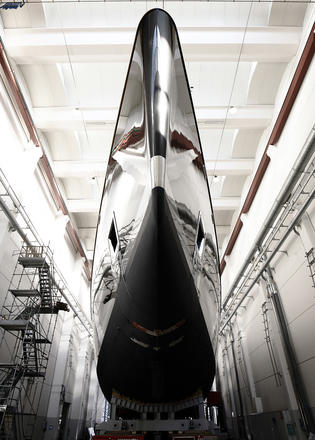 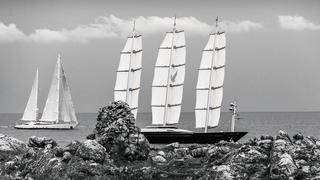 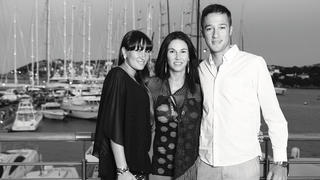 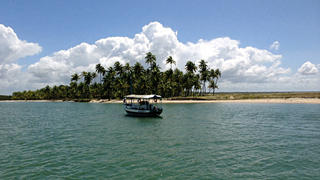 Sail away: In conversation with Milena Modigliani Perini of Perini Navi

Milena Modigliani Perini married into superyachting royalty, but she brought with her a canny business sense, a razor-sharp mind and a keen social conscience. Claire Wrathall catches up with her to talk beautiful boats, secret weapons and the buzz of working on the frontline...

Earlier this summer in La Spezia, on Italy’s Ligurian coast, Sybaris, a new 70 metre ketch, was rolled slowly out of her dry dock for the first time at the larger of Perini Navi’s two Italian shipyards. Milena Modigliani Perini looked on with tears in her eyes. “When I saw her touch the water, I felt such emotion,” says Milena, whose husband, Fabio Perini, founded the company and who herself might be described as the “first lady” of the superyacht industry, a figurehead, so to speak, who is admired and liked by the sailing community across the globe.

“Of course I’d seen her grow over four years, but seeing her on the water, I thought she was the most beautiful thing I’d ever seen in my life. She is marvellous. Unbelievable. Her lines are so elegant.” She pauses. “I should not say this because I love all our boats equally, like my children. But just between me and you, Sybaris is the one I’m in love with. She’s like a new baby. A very big baby.”

She is, for the record, the biggest sailing yacht ever to have been built in Italy. Owned by the US lawyer-turned-software magnate Bill Duker, Sybaris was designed by Perini Navi with, in Duker’s words, “minimal, not minimalist” interiors by PH Design. She is the most striking yacht to have been built by the Italian yard since it launched 88 metre Maltese Falcon in 2006, the immediately recognisable sailing yacht that incorporates a revolutionary rig that enables its three self-standing, rotating masts to hoist its 15 sails at the touch of a button. (Such is its size that it had to be constructed at Perini Navi’s shipyard at Tuzla, a province of Istanbul, in Turkey, where the group’s hulls and superstructures are built.)

The system at work on Sybaris is even more sophisticated, Milena says proudly. “I know how much my husband and his team have invested in the development of a technology he invented [to enable] an automatic way of sailing. He is always busy with winches!”

Fabio Perini was born close to Viareggio, where Perini Navi has its headquarters, into a family with a paper factory. He made his fortune in toilet paper, having invented mechanisms not just to produce it but also to roll it. On realising that this winding technology had potential as an application in winching and sail rigging, and confident that the only way he was going to find the kind of yacht he wanted to sail – a high-performance sailing boat with all the comfort of a motor yacht and automated sails – was to design and build it himself, he set up Perini Navi in 1983. Two years later, Milena Modigliani, a native of Viareggio, then 20 and a student of modern languages at the University of Pisa, got a job in its sales department.

It wasn’t that she needed to work, she explains. Her father was against it. “But I strongly wanted to be independent, no matter what,” she tells me over a lunch of antipasti, asparagus risotto, sliced tropical fruit and exquisite miniature pasticceria in the Viareggio boatyard’s canteen. “And I had always loved watersports and especially sailing. The sea has always been a sine qua non for me. I could never imagine living very far from it.”

Milena loved working there and stayed on. “It was a very different company then. There were only eight of us – now there are almost 150! So back then each of us was doing several things. It was like a family. We not only worked together, we went out together and we spent our free time together. It was fantastic.”

After graduating she married a geologist, Gino Natali, a scion of the family behind the Querceta-based marble-quarrying and processing giant Henraux (and another accomplished sailor, with whom she shared a 14 metre sailboat that they took all over the Mediterranean). The couple travelled the world, particularly to Brazil, where they settled and had twins, Giulia and Lorenzo. Tragically, Gino was killed in a plane crash in 1994. He was just 40; the twins were four.

Milena and her children returned to Italy to her father and grandparents in Viareggio, where once again she became acquainted with Fabio Perini. A relationship was kindled and in 1996 they married. She has devoted herself to Perini Navi, where much of her role is ambassadorial, ever since.

“OK, we build beautiful boats,” she says. “We have completed almost 61 to date. But I believe our secret weapon is our community of owners, the fact that it all feels like one big family. It’s fantastic how they love to spend time with us.” Each March, for example, Perini Navi rents the same house in St Barths for the duration of the Bucket. “Every night we have a dinner at the house – we bring a chef with us from Italy – for the owners of our boats, their crew and some locals. They all come, so the house is filled with people, and we eat, we dance, we sing,” she says, suddenly breaking into a powerful rendition of Don’t Cry for me Argentina (Milena has a fine soprano). “It’s very difficult to send people away even at two or three o’clock in the morning. They just don’t want to go. But I’m saying: ‘Tomorrow morning we have to go racing. That is what we’re here for. Don’t forget!’”

The St Barths gatherings are so successful that “we’re always trying to invent more occasions to be all together because our owners enjoy each other’s company. It’s interesting to see them together as they get to know each other.” Indeed, as the Financial Times once observed, “if there is one thing more fascinating than a Perini, it’s the owner of a Perini”.

This, then, was the inspiration for the biennial Perini Navi Cup, a regatta restricted to Perini yachts in Porto Cervo in Sardinia. Sixteen yachts competed at last year’s event, where the overall winner was Rosehearty, a 56 metre yacht launched in 2006, designed by Perini Navi and Ron Holland with interiors by Christian Liaigre. (Before its current owner, it belonged to media kingpin Rupert Murdoch. It was Murdoch’s second Perini; he sold his first, Morning Glory, to Silvio Berlusconi.)

Also competing at Porto Cervo last September were a who’s who of Perini greats, including Perseus^3, Seahawk and Clan VIII, owned by shipping magnate Betram Rickmers, which came in second. Maltese Falcon was there too, though it had been chartered by Li Jian, chief executive of Seven Star Bay Marina in Shenzhen, who discovered the joy of racing Perini yachts two years earlier when he chartered 45 metre Helios, launched in 2007 and currently listed for sale.

“It’s so nice to see owners not only enjoying life together but also talking business, exchanging ideas,” she adds, “and meeting each other.” It was, for example, at the inaugural Perini Navi Cup in 2004, that she and her husband were introduced to Bill Duker.

“Our work takes us to the most beautiful places, where we meet the most interesting people, so we hardly need holidays,” she laughs. That said, twice a year they decamp to the island they own off the Bahian coast of Brazil, a country they both love and where they have taken out citizenship. Here they have a fazenda (ranch) she calls their “buen retiro” (good retreat). “It’s very informal, almost primitive,” she says. “No luxury at all. You don’t need fancy dresses, just a bikini and a pareo [wraparound skirt]. But it’s one of the few places in the world where we can really disconnect. The internet works sometimes but often it doesn’t. Neither does the phone. And this is fantastic. Most of the time people know not to try to contact us while we’re away so they leave us alone and we can just enjoy time with our children and our friends.

“Last Christmas there were 53 of us there! But we have plenty of space for everybody. We dance a lot; we play a lot of sports. Tennis is almost compulsory!” Do they sail? “No!” she replies. “Well, we have little boats like Hobie Cats and some toys. But there’s a reef and several rocks, so it could be dangerous. The only time we get to sail now is when owners ask us aboard.”

Milena’s love of Brazil is such that she also has philanthropic interests there. The only Bolshoi Theatre ballet school outside Russia is, she tells me, in Joinville, 326 miles southwest of São Paulo. A project run by her daughter provides funding for promising dancers from deprived backgrounds to train there as well as accommodation for them. And she is also closely involved in fundraising for the foundation established by her friends, the singer Andrea Bocelli and his wife Veronica, which seeks to alleviate “poverty, illness and malnutrition” around the world. Her real commitment to good causes, however, is evident in her work for the Red Cross, for which she spent three years training as a volunteer nurse. Last November she spent 20 days working in a refugee camp for migrants in Sicily.

“I like to be on the frontline!” she says. “I like doing practical things. I believe anyone who is privileged enough to be healthy and live a life they enjoy should try to give something back. In any case, it is just so fulfilling. It’s a better feeling than anything. In that respect, it’s actually one of the most selfish activities I can think of.”

If one had to choose a noun to describe Milena, it would be enthusiast – someone who loves singing and dancing and sailing and eating and drinking, but equally retains a strong sense of business and has a social conscience; a woman with a first-class mind (she has a second degree in history of art and also happens to be a descendant of the great 20th century Italian painter Amedeo Modigliani), no airs and a terrific sense of humour. Spend a couple of hours in her ebullient company, and you just can’t help wanting to be her friend. But be careful – you might just find yourself ordering a yacht from her.