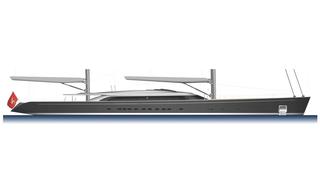 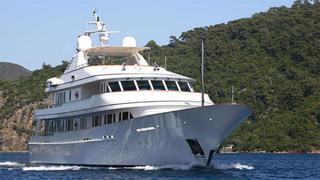 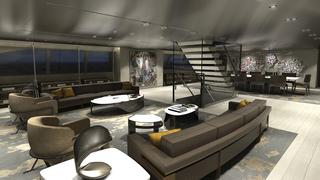 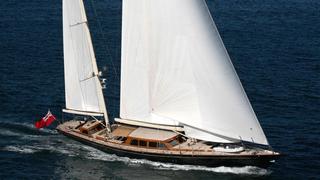 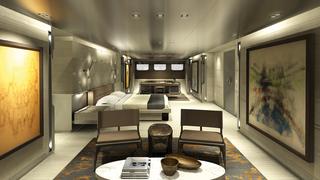 To celebrate _Sybaris _being named Sailing Yacht of the Year at the World Superyacht Awards 2017, we bring you this interview from our archive, in which Duker gave us the inside story on the build of the Perini Navi yacht.

Superyacht owner Bill Duker was always the man with a plan – until, as he tells Stewart Campbell and Sacha Bonsor, a health scare forced his life philosophy to change. The upside? A new 70 metre ketch, Sybaris, from which he will live every day to the full.

Life is what happens to you when you’re busy making other plans, goes the famous John Lennon lyric. It’s a line that rings true for lawyer-turned-software mogul and multiple yacht owner Bill Duker, after being told he might die before seeing one of his life’s dreams – owning a 70 metre sailing yacht – realised. “When I heard it (cancer) was in my lymph nodes, the worst bit was thinking that I couldn’t make plans,” he recalls, as we cluster around a saloon table on the big Perini Navi Perseus3 at the Monaco Yacht Show. “I’m somebody who has always lived with a plan.”

A week after his diagnosis in 2009, he made two resolutions: to ensure every single day is lived according to the plan; and to have a lot of fun. “From that moment forward, from after that first week, every day I get out of bed and ask myself what I’m going to do to have fun today,” he says. He beat the cancer, and judging from the smile on his face as he talks about his new superyacht project, he’s having the time of his life. The boat is Sybaris, a 70 metre ketch currently in build at Perini Navi’s Viareggio yard. When it’s launched in 2015 it will become one of the biggest sailing yachts on the planet, and immediately one of the most iconic boats afloat. In the meantime, he’s got the 52 metre Feadship Rasselas to play on. “The Feadship was not a passion,” he says. “It was just for fun. The Feadship was, ‘I can’t wait any more for my boat to be built!’”

His new-found philosophy is perfectly embodied in the sailing yacht’s name. For those who skipped classics at school, Sybaris was the name of a Greek settlement in ancient Italy known for its hedonism, feasts and excesses, represented in modern parlance by the word sybarite. “For Sybarites, living was important. And this boat is more than self-indulgent, it is everything we’ve always wanted. We’re giving ourselves something far beyond anything I could have imagined as a kid,” Duker says.

Boats of his childhood imagination were the working type. The son of a longshoreman from upstate New York, he grew up modestly, with some of his earliest boating memories born on the docks of Albany, where he was apprenticed in his father’s job. “We used to joke when I was a kid that working at the docks was the longshoreman scholarship. You know, I was brought down to the docks to work when I was 13 years old,” he says. “I grew up there. I wasn’t supposed to be there at 13, but my father was a union guy and the union guys took care of their kids and that was the only way the kids could make enough money to go to school.”

"Sybaris is more than self-indulgent, it is everything we've always wanted. We're giving ourselves something far beyond anything I could have imagined as a kid."

It was only later, as a successful lawyer, that Duker’s thoughts turned to spending time on yachts for pleasure. In 1992 he found himself working with a colleague from California and made any excuse to head to San Francisco on the weekend, where the two of them would go sailing. “One day he said to me, ‘We oughta buy a boat together. A big boat’,” Duker remembers. He loved the idea, so they bought Coconut, a 24.4 metre Dynamique sailing yacht.

The partnership lasted for about a year before Duker struck out on his own, buying the 32.5 metre Ron Holland-designed Shanakee. But even then, in 1995, when 32 metres was a seriously big boat, his ambitions weren’t satisfied. “The idea for Sybaris has been in my mind since then. My son West and I would sit on the back of Shanakee in the evenings and draw the boat of our dreams. I can’t tell you how many boat drawings there are. We talked about how big the boat would be, who was going to be on the boat, where we would go with it…” he says, fondly. Throughout our conversation West’s name keeps appearing and it’s obvious Duker is devoted to his only son.

It’s a professional and filial relationship – West works as the director of marketing at Duker’s software company, and partnered with his dad on the designs for superyacht Sybaris. The dream to build big is a shared one, a joint father and son longing, which started to become a reality during various regattas in the 1990s and particularly on one trip sailing in the Caribbean. “We were competing and started seeing bigger boats. And then we got a chance to get on board the (48.5 metre) Vitters Thalia in the Caribbean. Suddenly we had a sense that there were much larger boats out there and that you could do so much more with a bigger boat. They’re so monumental. This gave West and me a feeling of creativity and that really drove us.”

It took the better part of a decade, however, before Duker was ready to sign terms with a shipyard – and then came the cancer hammer-blow. Once in the clear, however, the plans could really gather momentum. “The boat kept growing in order to bring the lines down and make it look as sleek as it does. We thought it’d be a 56 metre, but then I started thinking that it had to be special, it had to be different. And there are already 10 or 11 or so 56 metres; I didn’t want hull number 12. I wanted something people could see from half a mile away and say, ‘Hey, there’s Sybaris’,” Duker says.

The exterior design was done in collaboration: Philippe Briand for the naval architecture and PH Design with input from West and Bill for the exterior. If you’ve never heard of PH Design, that’s because it doesn’t do yachts – it does residences. The studio has worked with Duker on his homes and such is his faith in it, he had no qualms tasking it with creating the look for his 70 metre yacht. Was it a risk? “It’s not risky to hire somebody I trust with everything,” Duker says. “We’ve known each other for so long that I only have to have a short conversation about what I want and they know exactly what I’m thinking. Every time I have an idea, PH Design makes it better. And I can’t say no to them. When they bring something to me, I say, ‘Wow, we have to do that!’”

PH Design also drew the superyacht's interior, and if the exterior of Sybaris was designed to be iconic, what’s inside was designed to inspire. It’s the same with all of Duker’s projects, whether it’s the glass box on top of a building in New York City, his 1920s property on the water in Miami (“the prettiest house on Miami Beach”) or his big estate in upstate New York on 300 hectares – each of them have interiors that, he says, “give people something to talk about”. A big part of that is the art – and Duker has an enviable collection. He started amassing it in the 1980s, and it features pieces from Frank Stella, Rodin and Jean Dubuffet. He’s still collecting for the new yacht, which has been designed to act as a sort of gallery.

“The interior is minimal, but not minimalist,” Duker says. “And every piece of furniture on board is art – every turn of the corner is art! I don’t think it’s possible to give a higher level of detail.” The renderings of Sybaris give you an impression of how big a part art and design play in the interior. More modern New York loft than boat, Sybaris’s owner won’t have any worries about conversation stalling over dinner. But with a Briand hull, a lightweight carbon fibre rig, and an estimated top speed of 17 knots – giving it regatta-winning potential – the yacht has plenty of sailing chops, too.

From conception to realisation, the superyacht will have taken 44 months to build – almost four years of intense, gratifying planning. I am concerned about what will happen when Duker’s boat is delivered – will he run out of plans? I needn’t have worried: “We’re going around the world,” Duker says. “I’m taking five years and doing my first circumnavigation. Part of the plan is to take on a local expert wherever we are in the world, so we can spend the evenings talking about where we’re going, what the history, geography, culture and politics are like in a particular area. We’re going to learn as we go around the world.”

But it would be naive to think he doesn't have something else up his sleeve. “You asked me if I was excited about delivery,” Duker says. “To some extent I am, but I have already started thinking about the next boat, and how it will be different. Like I said, it’s the planning that is important, making that dream happen. There’s a poem I wrote recently about it. I write crazy Dr Seuss-like poems. It takes five minutes and I do it every day,” he says, reciting one.

It opens: “I’ve lived my life by having dreams,” and ends: “Dreams are not just for the night, they give hope to live and fight.” There’s Lennon again: you may say he’s a dreamer, but he’s not the only one…