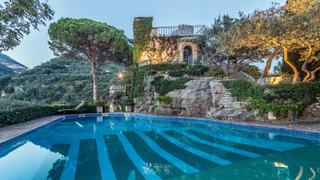 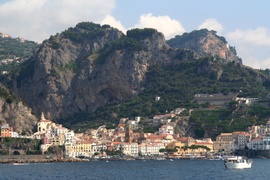 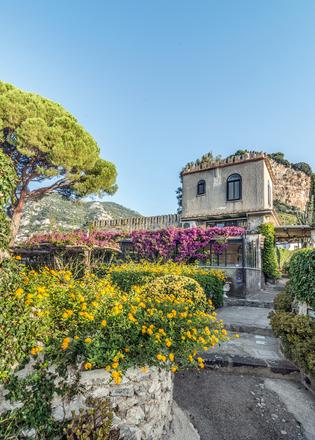 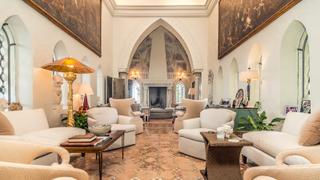 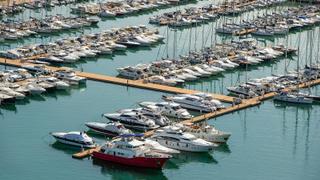 Property of the month: A former monastery on Italy's glamorous Amalfi Coast

The Italian market is rewarding buyers from around the globe who are lured by Amalfi’s siren call and Inspiration will surely flow at this elevated hideaway, a former monastery near arty Ravello, says Francesca Steele...

Property buyers have long been drawn to the Amalfi Coast for its secluded feel and stunning costiera architecture: think pretty coastal towns, terraced orchards with mind-boggling views, gorgeous churches and proximity to historic sites such as Pompeii. The region is also home to some of the grandest hotels in Italy and a handful of fine dining and Michelin-starred restaurants.

European house hunters – predominantly from France, Germany and the UK – tend to settle in hotspots like Positano, with its smart boutiques and terracotta cottages clinging to the cliffside, and the ancient fishing villages of Praiano and Conca, with their secluded beaches and sea caves. The quiet town of Ravello is the go-to destination for American buyers.

Agents say that it’s a good time to get a deal in Italy: according to Knight Frank, prime prices fell by 5.5 per cent in 2016. Those searching for a bargain should look at the lesser-known villages of Erchie, Cetara and Furore, says Sabrina Majello, sales manager of Italy Sotheby’s International Realty, while American buyers can benefit from the favourable exchange rate.

Perched at an elevation of 360 metres above the sea, the medieval streets and garden villas of Ravello have attracted artists and creative types for decades – Turner and Joan Miro painted here and Virginia Woolf, DH Lawrence and Graham Greene all visited. American writer Gore Vidal owned the whitewashed villa of La Rondinaia for three decades – it went on the market two years ago for $21.1 million.

Those looking for their very own Ravello cliffhanger should consider Torre di Civita, a stunning property with its own rich and celebrity-filled history, now on sale with Sotheby’s International Realty for €45 million. At 1,000 square metres, this home has plenty of room for creativity, with 12 bedrooms and 14 bathrooms as well as vineyards, orchards and vegetable gardens that spread across nearly 20,000 square metres.

The property sits on the site of a 12th century monastery and the original watchtower still stands at the estate’s highest point; its spruced up interior now contains a beautiful master suite. The main villa, which is traditionally styled, is set across three floors and has a real sense of indoor/outdoor living, with a magnificent drawing room with fireplace and chef’s kitchen, plus plenty of terraces, an outdoor kitchen and swimming pool.

“The stunning views that surround the property are considered its best feature,” says Carlo Cavandoli, sales agent for Italy Sotheby’s. “From the old medieval tower incredible views of the Gulf of Salerno can be enjoyed.”

How this property came to be transformed into a luxurious retreat is an intriguing tale, worthy of any novelist. The biggest renovations were done by the glamorous Countess Marajen Stevick Chinigo, who came across the property when sailing the coast with her soon-to-be husband. The couple, who were thought to have connections to the Mafia, fell in love with the place and bought it in 1952, according to Maureen Hughes in the biography The Countess and the Mob, and restored the villa and gardens. It has had several owners since then.

“The current owners have completely renovated the property and transformed all its buildings into the magnificent estate it is now – a truly unique offering in a stunning setting,” adds Cavandoli.

Torre di Civita’s elevated position is a 20 minute ride up the twisting hillside from nearby Porto di Amalfi – which has moorings and berthing for yachts up to 35 metres. The town of Ravello has plenty to keep you entertained, from the Michelin-starred Rossellinis restaurant at the Palazzo Avino to the town’s annual music and arts festival in the summer.

Brand new berths: The new €120 million Marina d’Arechi opened this year in Salerno, with easy access to Amalfi and Capri. It has 1,000 berths for yachts between 10 and 100m, including 80 for superyachts.

Eat up: The Amalfi Coast has some spectacular restaurants offering regional produce. Top tips from residents include the elegant Ristorante Eolo Amalfi and the more low key L’Antica Cartiera, both of which serve excellent local seafood and highly regarded local wines.

Disco den: Africana in Praiano is the coast’s most famous club, where Gore Vidal once mingled with Jackie Onassis and Rudolf Nureyev on the natural sea cave terrace.

Cause a stir: Palazzo Sasso in Ravello, once a private residence and now a high class hotel, offers some of the most refined clifftop drinking. Sip the famous martinis while overlooking the Gulf of Salerno.

Walk on by: Pasticceria Pansa, next to the cathedral in Amalfi, is the best spot for people watching as locals take their daily passegiate (stroll).

5 things to know about buying property in Mallorca

For sale: 9 properties as luxurious as your superyacht