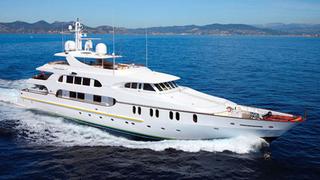 $1.5 million price drop on superyacht Pestifer I at Y.CO

News just in from the Y.CO brokers as the 49.8m motor yacht Pestifer I has a further $1.5 million price reduction, following a similar price cut in September 2011.

She was built by CRN in 1998 and, Lloyds classed and MCA compliant, she can accommodate eight guests in a master, two doubles and one twin stateroom.

Conceived for a very discerning owner wishing to cruise with a small number of close friends, Pestifer I is most definitely an 'owner’s yacht'. Her designers, Paolo Scanu and François Zuretti, have not attempted to conform to the current dictates of the charter market, and the result is both refreshing and intimate. Completed to the highest possible specification, Pestifer I is full of pleasant surprises, both in her engineering and her interior finish.

She has recently been surveyed by Patton Marine, all of whose recommendations have been put into effect, and a Stability Booklet was issued by Lloyds. All certificates of compliance are up to date.