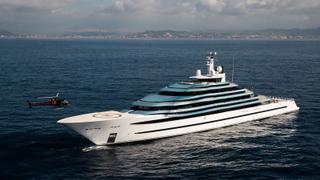 The 110 metre motor yacht Jubilee, listed for sale by Burgess, has been sold to a direct client.

Built in steel and aluminium by Dutch yard Oceanco to a design by Igor Lobanov, Jubilee was delivered in 2017 as the largest yacht built in The Netherlands. A huge volume interior by Sam Sorgiovanni accommodates 30 guests in 15 cabins. Four VIP cabins are found on the bridge deck, while there are a further 10 guest suites on the main deck. In addition, she boasts an entirely private owner’s deck that enjoys unmatched views.

The main saloon is a huge, open 135 square metre space focused around a large television at one end and a throne-like lounge chair at the other, sitting underneath a ceiling covered in golden aluminium ribbons. Floors throughout float on rubber foundations to dampen noise. Sea balconies on both sides of the main deck - at the dining saloon and lounge bar - open the expansive interior to the outdoors.

Features include the tremendous pool deck with a built-in aquarium. Just below is an inviting beach club - which also hosts a gym and hammam - and access to the water via a fold-down transom. Her top speed is 18.5 knots and she boasts a maximum cruising range of 5,000 nautical miles at 14 knots with power coming from two 4,828hp MTU diesel engines.

Jonathan Beckett, CEO of Burgess comments, “This marks a milestone in Burgess' history. Jubilee is very close to our hearts; following the initial introduction of Burgess client to shipyard, Burgess New Construction saw her successful build and delivery, then 18 months later our sales force closed the transaction, making it one of the largest deals not only in 2018, but in superyacht history.”

The asking price of Jubilee has been withheld.