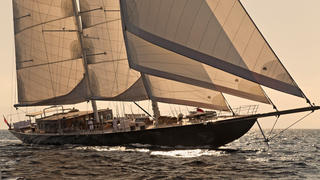 The 56 metre motor sailing yacht Regina, has been sold with Benjamin Barker at Engel & Volkers Yachting representing both buyer and seller.

Built by Turkish yard Med Yachts with a steel hull and mahogany superstructure to a design by Ayberk Apaydin, she was delivered in 2011 with a refit in 2016. An interior panelled in sapele mahogany throughout sleeps 12 guests in six cabins configured as two master suites with king sized beds, three double cabins and a twin. All cabins on this yacht for sale feature satellite televisions, DVD and music systems, individually controlled air conditioning, and en-suite shower facilities.

The main saloon has a classic décor with her mahogany walls showing off a white grand piano and white L-shaped seating to great effect, and there is an entertainment centre including a 55-inch Samsung LED television and a Bose stereo surround sound system. Forward is an elegant dining area with seating for 12 guests.

Regina also boasts generous deck spaces that sweep from bow to stern, where guests can sunbathe or dine al fresco at one of two separate dining tables, one on the foredeck and one on the aft deck, each with seating for up to 12 guests. The aft deck also features a large daybed for sunbathing and a casual wet bar.

The 2016 refit included repainting her hull and revarnishing her superstructure, as well as having her rigging checked and replaced. Under power, twin 440hp MTU diesel engines give her a cruising speed of 12 knots.