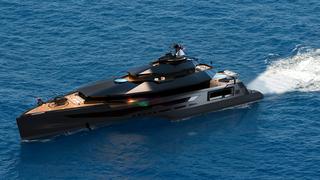 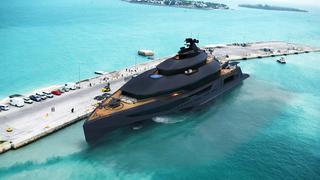 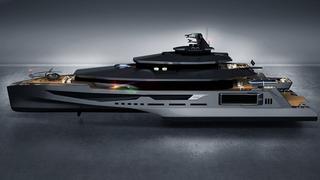 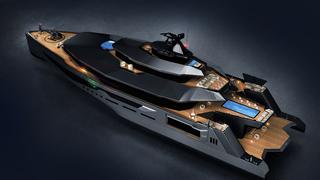 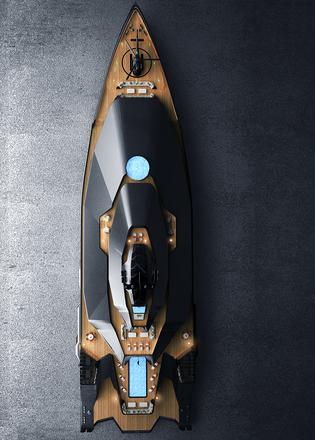 Calibre 102 yacht concept is fit for a Bond villain

With a black and grey paint job, edgy exterior lines and set atop a swift trimaran hull, the Calibre 102M from MUB Design is a fierce yacht concept fit for a Bond villain.

The last yacht to perform alongside 007 was sailing superyacht Regina, star of James Bond film Skyfall. But there is something even more fitting about this intimidating 120 metre concept from Paris-based MUB Design that demands to be cast in an upcoming James Bond flick.

According to the designer, the exterior design is inspired by the taper of a bullet – fitting for the arsenal of any bad guy– yet she’s also sleek and sexy, intended to turn heads and stand out from the parade of “wedding cake” yachts in a harbour.

While the 102 metre superyacht has movie star looks, she’s actually quite realistic for a wild concept. The Calibre 102M is based on the proven hull platform of the next-generation Austal trimaran. The first of these new Austal trimarans, hull No 270, was purchased for £50 million by Condor to serve as a fast ferry.

It was such fast ferries that inspired Mahjoub El Mahmoudi of MUB Design to create the Calibre 102M.

“Every summer we used to go to spend our family holidays in Morocco, my country of origin. We started in Paris, and then drove through France and part of Spain to the port of Algeciras, where there were many types of boats,” Mahjoub El Mahmoudi said. “I remember that I was instantly fascinated by the fast ferries, particularly by their lines and their speed. I could never hide how excited I was when I went on board – it was a real adventure for me, every time".

This fascination with fast ferries has translated into the Calibre 102M concept, which is not only designed to be speedy – reaching up to 39 knots thanks to power from three MTU 20V 800 engines – but also extremely comfortable and stable in rough seas, able to handle a swell of five metres or more. Perfect for a chase scene where a fast getaway is required.

The Calibre 102M will have the requisite top superyacht design features of a sports area, helicopter deck, gym, and Jacuzzi and swimming pools. MUB also plans for a huge kit of toys, stowed in the beach club, to come with the yacht, including a submarine, Jet Skis, sea sleds and JetLev jet packs.

There will also be a nightclub for entertaining and a large aquarium – perhaps big enough for feeding Bond to the sharks?

Misha Merzliakov pens a 102m trimaran based on a fast, efficient hull by Austal