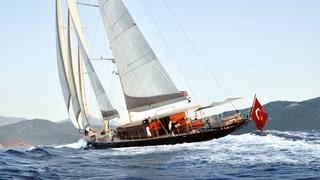 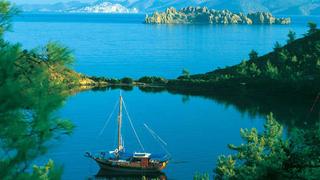 She was the stunning beauty that lit up Skyfall – not Bond girl Bérénice Marlohe but Doğukan Boyacı’s spectacular 56 metre schooner superyacht Regina on which the film was shot. Stewart Campbell meets the 28-year-old Turk who gave Daniel Craig AKA James Bond an experience (and a shower) he’ll never forget.

“When I leave they’re going to kill you,” the haunted beauty Severine purrs at James Bond in a Macau casino, leading him to glance at the three bodyguards watching nearby. “If you survive, I’m on the Chimera. North harbour. Berth seven.” With a vampish smile, the femme fatale from 2012’s Skyfall stands and wishes Bond luck. The secret agent raises his Martini glass to the three heavies before quickly dispatching two of them with a briefcase and leaving the third to become dinner for a hungry Komodo dragon.

Cut to Chimera. Severine paces the yacht’s saloon before stepping into a steaming shower. And we all know what happens next.

Only a few people were in on the secret of that now famous shower scene, and one of them was Doğukan Boyacı, the 28-year-old vice-chairman of Pruva Yachting, manufacturer and owner of the 56 metre superyacht known in the film as Chimera, but in reality as Regina. Up until that moment all the shots on board had been legitimate, but the film crew couldn’t get all their gear below deck for Bond and Severine’s moment in the shower so it had to be done in a studio. That small embellishment aside, it was Regina in all her glory up there on the silver screen and Boyacı, her indecently young owner, couldn’t have been more proud.

“We thought it was a once-in-a-lifetime chance for our company,” he says, still clearly energised by the fact that it is his boat that’s been immortalised. “James Bond is one of the biggest trademarks in the world and to use our yacht was a great opportunity. It led to lots of enquiries and Regina had wonderful charter seasons in the Med and Caribbean. Just after the movie came out we got dozens of charter enquiries, and it’s still going on. Now all our clients and brokers know Regina as the ‘ James Bond yacht’.”

In the film, we’re treated to sweeping shots of Regina as she leans elegantly with the wind on the approach to the island lair of bad-guy Raoul Silva. Bond joins Severine on deck, where the severe-faced henchmen and desolate island in the distance do a great job of highlighting the beauty of this classic-looking ketch.

The superyacht was launched in 2011 for charter, to an exterior design by Turkey’s Ayberk Apaydın and an interior by Aylin Örs. “The aim was to build a classic yacht using only natural materials that would be ultra comfortable for the charter guest,” Boyacı says. “She had to be really strong in sailing and completely different from the normal gulet.” She achieves that with her Roaring Twenties charm and big square deckhouse, which covers an expansive saloon that was transformed into Severine’s bedroom for Skyfall.

Boyacı says it took his company a month to get the yacht ready for the film. “We did lots of modifications. It was really very difficult to prepare the yacht for them but we succeeded finally.” Soft furnishings had to be changed and some re-upholstering was required inside and out. Up top, meanwhile, the rigging was altered to provide the camera with open views of the deck. It was all done in collaboration with EON Productions, maker of Bond films, which did a lot of filming for Skyfall in Turkey, particularly around Istanbul and Fethiye. Regina was chosen by EON almost by chance: one of the Turkish production company’s workers had seen her cruising in Göcek, and EON approached Burgess to find out more about her.

It took eight days for filming to wrap on the yacht and the actors were on board every day, along with director Sam Mendes, although they stayed ashore at night. They wouldn’t have been disappointed with the yacht’s digs, though, with her six comfy cabins housing 12 guests. Boyacı doesn’t have any stories of actors throwing TVs overboard or going wild on raki, and instead reports that the two stars – Daniel Craig and Bérénice Marlohe – were “very polite people”. They loved the yacht, according to Boyacı, telling him that Regina was “quality and luxury”.

Boyacı is a lucky man, therefore, to be able to spend so much time on such a boat. Though the yacht is offered first and foremost for charter, he always makes sure to spend two weeks on board each year – one week in the Med and one in the Caribbean. He spends another week on board Primadonna, his company’s 21.5 metre gulet. You might think that 28 is too young to be in such an enviable position but Boyacı, son of Pruva founder Bedirhan Boyacı, was not just gifted a top job. He says he started “at the lowest level, in the charter department”, when he was 22, straight out of university. He was eventually promoted to vice-chairman in mid-2014 and is loving the position he occupies. So far, his youth isn’t working against him. “I always feel very young but I have not encountered any problems. I respect people with experience but young people should be given a chance.”

At the time of writing Regina was in the British Virgin Islands, enjoying another successful charter season and it was near here that Boyacı recently spent time on the yacht. He flew over to hook up with her at the Antigua Charter Yacht Show in December, which handily is also his favourite place in the Caribbean. He frequents Catherine’s Café Plage – “delicious food, pleasant atmosphere and a very nice beach” – and the island’s Abracadabra restaurant, where Italian food always precedes a night of dancing. By the time you read this Boyacı will already have jetted back to the Caribbean for another week aboard Regina, this time around St Maarten and St Barths.

Living in Bodrum, Pruva’s vice-chairman gets to see one of his other loves only once a month – the football club Galatasaray. But he plans to travel with the team next season and watch them compete in Europe’s premier club competition, the Champions League.

In the meantime there’s a busy boat manufacturing and charter business to run. In the sheds at the moment is a 37 metre sailing yacht and the company is doing research and development on a 45 metre explorer, which is a break from the more traditional gulets it is better known for. The first gulet it produced, in 1996, was named Doğukan. But this boatbuilding scion says he is most attracted to modern explorer yachts, especially Oceanco’s 81 metre Alfa Nero and the latest output from Icon. On the sailing yacht side, he admires the sleek lines of Alloy’s 67 metre Vertigo.

It’s unlikely you’ll see Bond on a big modern superyacht such as this any time soon, unless it’s to take out a bad guy. But that’s just fine. A classic fictional character needs a classic yacht, even one that was built as recently as 2011. In one of the last shots of Regina in Skyfall, we see her from the air, beautiful and poised as she sails easily towards what we soon find out is Severine’s doom. Boyacı could be forgiven, though, for not caring too much about this sad twist in the plot. He was too busy smiling. “To see our yacht on the Hollywood stage? Well, what can I say? It was just an incredible feeling.”