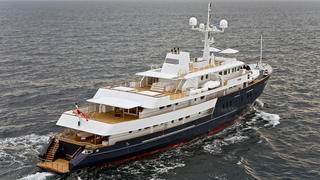 The 60.4 metre motor yacht Titan has been sold with Burgess representing the seller and the buyer introduced by Edmiston & Company.

Built in steel and aluminium, Titan was launched in 1968 by British superyacht yard Brooke Marine and commissioned into the Royal Navy as HMS Beagle. But, after a 2005 rebuild she became a luxurious superyacht and has had several upgrades since. Most recently, in the winter of 2013/2014, she had a complete hull repaint and an interior refurbishment.

The main saloon features a cinema screen and is perfect for small groups or for use as one large open space for entertaining when linked up with the saloon. The library is situated on the upper deck, complete with a flatscreen television and DVD player, as are the gym and bar, with the sky lounge opening up to a sheltered verandah through automatic glass doors.

The accommodation on board is impressive, with 12 guests sleeping in six cabins, including a 90 square metre owner’s suite, plus two doubles and three twins, all with en-suite bathroom facilities.

Four Lister Blackstone diesel engines give her a range of 6,000 nautical miles at 11 knots and she is fitted with Vosper zero speed stabilisers.