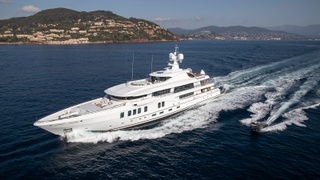 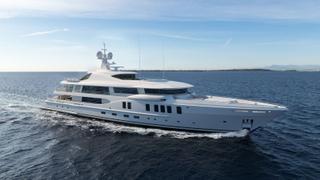 The 67.6 metre motor yacht Aurora Borealis, listed for sale by Antoine Larricq at Fraser, has been sold with the buyer introduced by Burgess.

Built in steel and aluminium with exterior design by Tim Heywood, she is the first hull in the Amels 220 Limited Edition range. Aurora Borealis was delivered in June 2019, making her debut at the 2019 Monaco Yacht Show. British design studio Winch Design was appointed to style the interiors.

Accommodation is configured for 14 guests in seven cabins comprising a master suite forward on the main deck, two VIP suites on the bridge deck and four convertible twins/doubles on the lower deck. All guest cabins will have entertainment centres, Apple television screens and en suite facilities while the crew quarters sleep 16 staff.

Special features include a guest elevator to all decks, a steam room, spa and a fully-equipped gym. A tender garage is spacious enough to house two eight-metre tenders.

Her top speed is 17 knots and she boasts a maximum cruising range of 5,000 nautical miles at 12.5 knots with power coming from two 2,600hp Caterpillar 3516 diesel engines. For added safety and comfort, she is fitted with Quantum zero speed stabilisers.