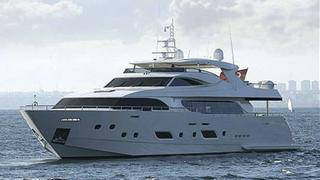 News just in from George Hapipis at A1 Yacht Trade Consortium that the luxury yacht Kivircik has sold in Istanbul, Turkey.

Built in composite by Turkey's Mengi Yay yard in 2009 and RINA classed, the 36.5 metres yacht has been purchased by a non-European buyer in an in-house deal. The asking price was €5.7 million.

Lovers of the outdoors are well catered for too. Ticking the boxes for al fresco entertainment are a dining area that's open for views over the stern and a teak-decked flybridge with a raised jacuzzi. The garage holds an Avon Jet Seasport tender and toys include a SeaDoo jetski. Beneath the lid, twin 2,735hp MTU engines will maintain a cruising speed of 21 knots and a top speed of 25 knots. Fuel capacity is 15,000 litres.