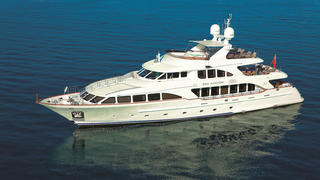 The 36.6 metre motor yacht Red Anchor, listed for sale by Burgess, has been sold with Ed Dickinson, Kristen Klein and Kevin Merrigan at Northrop & Johnson introducing the buyer.

Designed by Stefano Righini and built in GRP by Italian yard Benetti to ABS class, she was delivered in 2009 and has had the same owner since new. An interior in calm shades of cream and pastel by Francois Zuretti and Adam Lay accommodates up to 12 guests in a flexible layout of a main deck master suite, two doubles and two twins convertible to doubles plus two Pullman berths, all with entertainment centres, HD television screens and en suite bathroom facilities. In addition, there are quarters for seven crew.

The expansive main saloon has ample seating on cream settees and armchairs, a sophisticated entertainment centre including a large screen television set and there is formal dining forward for 10 guests.

A popular charter yacht, Red Anchor has al fresco entertaining and dining on both the main and bridge aft decks, along with the sun deck, offering a six-person Jacuzzi spa pool, pool bar, seating and tables and a Bimini top for shade. Forward on the bridge deck is a sky lounge designed for relaxation on scattered settees and an entertainment centre including a 42 inch television screen and a stereo surround sound system.

Twin 1,550hp MTU diesel engines give her a cruising speed of 13 knots, a range of 3,300 nautical miles at 11 knots and she is fitted with Naiad zero speed stabilisers.