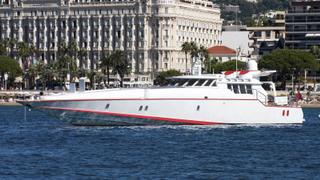 The 33 metre fast motor yacht G Whiz, listed for sale by Cornelius Gerling at Edmiston & Company, has been sold with Will Bishop at Yachting Partners International introducing the buyer.

Custom built by British yard Brooke Yachts and designed by Jon Bannenberg with Renato Levi as naval architect, G Whiz has an aluminium hull and kevlar superstructure, and was delivered in 1989 with a full refit in 2012. Accommodation is configured for six guests in three cabins comprising a master suite and two twins, all with Sony entertainment systems and en suite bathroom facilities. A further two cabins sleep three crewmembers.

1986 saw Richard Branson’s Virgin Atlantic Challenger II cross the Atlantic with the power and strength to break the world speed record and take the coveted Blue Riband trophy. A wily buyer saw the opportunity of uniting the same design and build team to produce a yacht with a similar turn of speed but with all the refinements of a modern superyacht, and so G Whiz was born.

The profile and interior are unmistakably Bannenberg's inspiration, right through to the clever use of fabrics and colour. There is sophistication, comfort and style — but also fun. The ride is exhilarating, but the level of noise and vibration usually associated with high speed is, quite simply, not there. This is despite two powerful 3,600hp MTU diesel engines powering her to a cruising speed of 36 knots, topping out at a heady 45 knots.