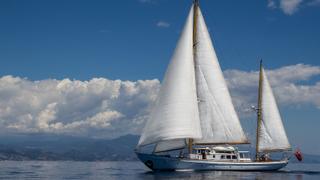 The 30.27 metre classic motorsailor Fei Seen has been listed for sale by Mike Horsley and Hans van Doornmalen at Edmiston & Company.

Built in steel and aluminium by German yard Abeking & Rasmussen to a design by Philip Rhodes, Fei Seen was delivered in 1961 but sadly her owner died a year later and she was sold on to a well-known yachting family. Her traditional interior sleeps six guests in three double cabins and there are also quarters for up to seven crew aboard this yacht for sale.

The main saloon is large and comfortable with ample seating, great views and an entertainment centre including a Samsung 42 inch television screen and a Kenwood stereo surround sound system. Generous deck spaces mean that she can also be enjoyed with al fresco relaxation when weather conditions permit.

The teak decks and hull are massively constructed, as are the entrance hatches to the engine room, making Fei Seen a safe and comfortable vessel for long distance cruising in all waters. There have been numerous refits over the years with the last major one being in 2003, and she has been constantly maintained since.Ketch rigged, she is in her element under sail, while under power twin 288hp Detroit Diesel engines give her a cruising speed of 10 knots and a range of 3,200 nautical miles.