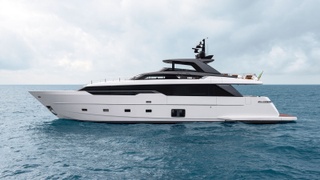 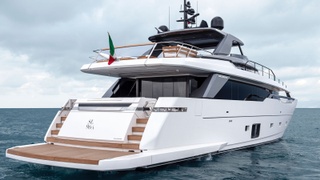 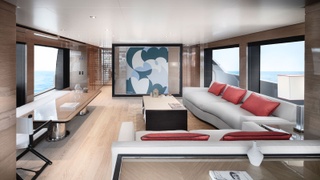 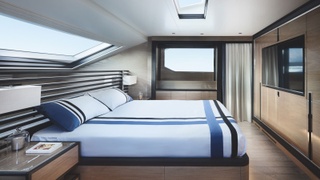 The first 29.22 metre Sanlorenzo SL96 Asymmetric motor yacht has been sold with the buyer introduced by Lengers Yachts and delivery to her new owner very soon.

The SL96 made its debut at boot Dusseldorf in January with a design that has its genesis in the partnership Sanlorenzo announced in 2015 with American car designer Chris Bangle. However its development was entrusted to Zuccon International Studio while the interiors were handled by Laura Sessa.

The yacht features a four cabin layout including a master cabin forward on the main deck with a starboard side door that opens onto the single side deck offering access to the foredeck lounge. This entire forward space can be shut off by a gate at the touch of a button to create an area of privacy on board.

The other three en suite guest cabins are found on the deck below including two twin cabins and a full-beam double cabin.

Opting for a single side deck on the starboard starboard side has enabled Sanlorenzo to expand the square footage of the living area by around 10 square metres. The main saloon is a bright social space on board, flooded by natural light thanks to large windows on either side, that also allows those on board feel better connected with the outside environment.

Twin 1,947hp MTU diesel engines allow a cruising speed of 26 knots topping out at 28 knots and she is fitted with zero speed stabilisers,

The asking price of the Sanlorenzo SL96A has been withheld.